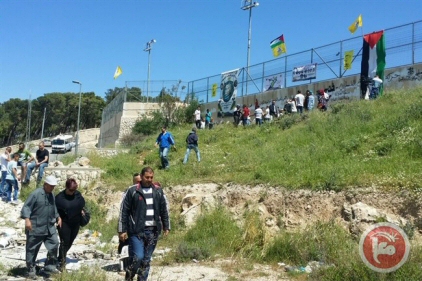 Israeli forces, on Wednesday morning, uprooted and burned 47 olive tree saplings that were planted in the annexed East Jerusalem neighborhood of Silwan, last month, to mark the 40th anniversary of Land Day.

The 47 olive tree saplings were planted by local members of Fateh on March 30, to honor the 47 Palestinians shot dead by Israeli forces in Jerusalem since a wave of unrest swept the occupied Palestinian territory, last October.

A mural was created, at the same time, bearing the names of 12 of the dead whose bodies were still being withheld by the Israeli authorities.

An Israeli police spokesperson was not immediately available for comment, according to Ma’an News Agency.

Jerusalem has been one of the key focal points of violence over the past six months, with nearly a quarter of all Palestinian deaths taking place in the divided city. The majority of these people were killed after alleged attacks on Israelis, although Palestinians and rights groups have disputed the circumstances of some of these deaths.

Several others were killed during clashes. Silwan residents have seen increased Israeli police activity through the period, with the Wadi Hilweh Information Center reporting at least four demolitions of Palestinian homes in the neighborhood, in the past month alone.

Last week, Israeli forces attempted to stop Palestinian residents from staging a sit-in in protest of Israeli efforts to push them out of the area.