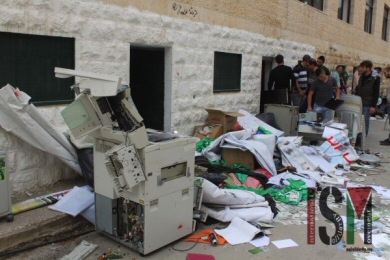 In the early hours of Tuesday, 5th April, around 3am, an armed group of Israeli soldiers stormed the campus of Al Quds university in the area of Abu Dis, part of East Jerusalem. The soldiers terrorised security guards on duty and forcefully entered four rooms belonging to student political parties and confiscated equipment while completely destroying the rest of the rooms. Destroyed items from the Tuesday morning raid gathered outside the rooms

During the early hours of the morning the only people present at the university campus were the campus security, they were rounded up and locked together in a room, they were given no reason from the soldiers as to why they were being locked in a room nor as to why the soldiers were entering the campus grounds. The soldiers proceeded to forcefully enter four rooms belonging to various political parties run by students of the university, cutting the locks and smashing their way in, completely destroying the doors. This is the fourth time in 2016 alone that soldiers have entered the campus, destroying and confiscating material while giving no reason for their actions. One of the computers amongst other items destroyed in the raid

The rooms entered belong to varying student bodies who’s students work within the university and the local community. Among the varied groups they advocate student rights, create activities within the campus and surrounding neighbourhoods, hold discussions on the state of the middle east, volunteer within the community, offer services for students, hold workshops and meetings about young prisoners and host an array of solidarity activities for the Palestinian community. During the raid the army took personal computers, laptops and cameras belonging to the Islamic party. Around one hundred and seventy flags were confiscated from the union party room and all of their stationary equipment for creative activities. Whatever was not taken was destroyed during the raid by the occupying forces. Damaged items from the raid

The activities room for the ladies Islamic movement which works mainly with disadvantaged youths and students had the majority of their belongings destroyed, posters ripped from walls and electronic equipment confiscated. The activities room for the ladies Islamic movement

The area of Abu Dis were the university is located was around thirty thousand hectares prior to 2002 and is now around four thousand hectares with 75% of the area now falling under area C and 25% under area B. This malicious land grab by the Israeli government has left students facing huge difficulties with their education. Many students within the faculty of medicine can’t reach Jerusalem where the main hospital for training is located and have been forced to go elsewhere for their practical while the media faculty faces new difficulties also. Since the beginning of what most would call the third intifada, checkpoints leading into the city of Ramallah, where the media students must go to complete their practical work have become extremely tightened and students are often denied access to the area or face long waits to enter. The annexation wall surrounding the university

On the 2nd November, 2015, Israeli forces entered the campus around 4pm and began firing on students using tear gas, rubber coated steel bullets and even using live ammunition. Over two hundred students were injured and required medical care while two students were seriously injured, with access to Jerusalem hospital unavailable the students were forced to travel over an hour to the city of Ramallah for treatment. One of the destroyed rooms

With the student elections to take place on April 19th, this attack falls into Israel’s wider policy of targeting political activity within student campuses and bodies as a means of repressing resistance to the occupation.

Four students of the university have been killed by Israeli forces since November, 2015.

More stories at the official website of the International Solidarity Movement (ISM).