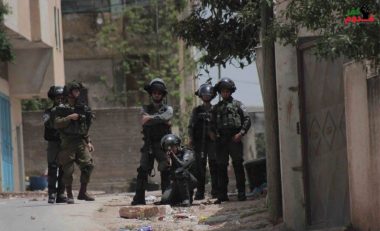 Israeli soldiers attacked, Friday, the weekly protest in Kufur Qaddoum village, in the northern West Bank governorate of Qalqilia, shot and mildly injured eight Palestinians, including a journalist and an Israeli peace activist.
Morad Eshteiwy, the media coordinator of the Popular Committee against the Wall and Colonies in Kufur Qaddoum, stated that the soldiers resorted to the excessive use of force against the protesters, and fired many rubber-coated steel bullets and gas bombs.
He added that local medics provided treatment to nine protesters, including Palestine TV cameraman Enaal al-Jada’ who was shot with a gas bomb in the leg, and an Israeli peace activist.
The soldiers also invaded several homes, and used some of their rooftops as monitoring towers and firing posts.
Local youngsters clashed with the invading soldiers, and hurled stones and empty bottles at them.
Kufur Qaddoum activists also installed a protest tent in the town, in solidarity with the hunger striking Palestinian detainees in Israeli prisons, and announced that the weekly protests would be held twice a week.

|The Demands Of Hunger Striking Detainees In Israeli Prisons|