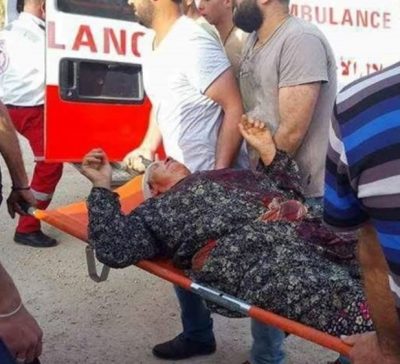 Groups of extremist Israeli colonists carried out, Saturday, a series of invasions into Palestinian towns, including attacking a number of homes, in the northern West Bank governorate of Nablus, wounding an elderly woman and two young men, while Israeli soldiers also injured four young men, and caused many Palestinians to suffer the effects of teargas inhalation.

The attacks resulted in wounding an elderly woman, identified as Badee’a Mohammad Hamdan, 72, who suffered various cuts and bruises, including to the head, in addition to two young men, identified as Ahmad Jamil Odah, 34, and Ahmad Yousef Odah, 32.

Palestinian ambulances rushed to the village, and transferred the wounded residents to local hospitals.

Mohammad Awwad Najm, Fateh Movement spokesperson in Huwwara, told the WAFA News Agency that the attacks today were carried out in front of Israeli soldiers, who even protected the assailants.

He added that, instantly after the Israeli colonists started their invasions, local “Civil Guards” used the mosque’s loud speakers to warn the residents, but a group of assailants managed to infiltrate the village from the western part of the town, attacked the homes and residents, and fled within minutes.

On Saturday morning, dozens of colonist settlers invaded ‘Orif town, south of Nablus, and attacked many homes, causing excessive damage, especially to windows and doors, before Israeli soldiers also invaded the village and fired dozens of gas bombs, rubber-coated steel bullets and concussion grenades at the Palestinians who countered the assailing colonists.