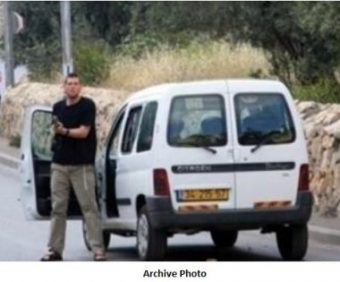 Palestinian medical sources have reported Saturday, that a young man was injured when he was struck by a speeding Israeli colonist’s car, in the al-Mas’oudiyya area, west of Nablus, in the northern part of the occupied West Bank.

The sources stated that the young man, identified as Assem Salem, 19, was trying to cross the road when the colonizer struck him with his car, and fled the scene without stopping, or even slowing down.

In related news, groups of extremist Israeli colonists carried out a series of invasions into Palestinian towns, including attacking a number of homes, in the northern West Bank governorate of Nablus, wounding an elderly woman and two young men, while Israeli soldiers also injured four young men, and caused many Palestinians to suffer the effects of teargas inhalation.

On Thursday, a Palestinian teenage girl, identified as Kawthar Mohammad Shawriyya, 17, suffered moderate wounds after being rammed by the Israeli colonist’s car, who also fled the scene.

On Wednesday evening, Israeli soldiers shot and killed a young Palestinian man, identified a Soheib Mousa Mashahra, 21, from the Sawahra town, near occupied East Jerusalem, after alleging that he deliberately carried out a ramming attack with his car.

The incident took place near Etzion Junction, south of Bethlehem, while videos and images from the scene clearly showed that the Palestinian car crashed into the rear of an Israeli bus.