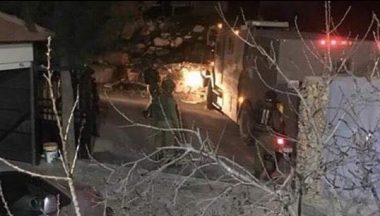 Israeli soldiers abducted, on Sunday at dawn, eight Palestinians, and summoned for others for interrogation, during extensive and violent searches of homes, in different parts of the West Bank governorate of Bethlehem.

The soldiers also summoned three Palestinians for interrogation in Etzion military base and security center, south of Bethlehem. They have been identified as As’ad Ahmad Thawabta, 28, Ali Mustafa Taqatqa, 27, and Ala Khaled Sammour, 27.

In addition, the soldiers invaded and searched many homes in Husan town, west of Bethlehem, and abducted Fateh movement secretary in the town, Ismael Jamil Hamamra, 48.

Another Palestinian, identified as Samer Samir Shanteer, 18, was abducted from his home in the Saff Street area, in the center of Bethlehem city.