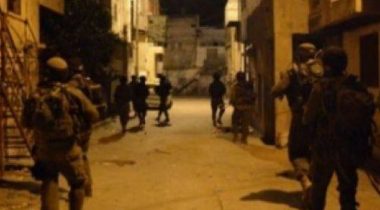 Media sources in Tulkarem said the soldiers interrogated several
Palestinians, while violently searching their homes, and abducted three, before taking them to an unknown destination.

Also at dawn, the soldiers abducted eight Palestinians, and summoned for others for interrogation, during extensive and violent
searches of homes, in different parts of the West Bank governorate of Bethlehem.