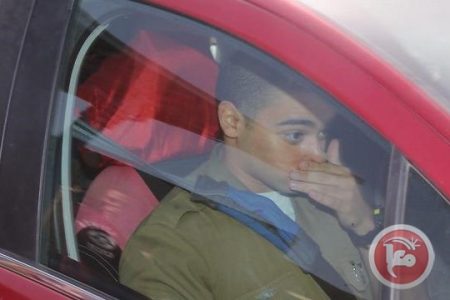 An Israeli military court, on Thursday, granted the request of Israeli soldier Elor Azarya — who was convicted, last month, of manslaughter for the filmed, execution-style shooting of 21-year-old Abd al-Fattah al-Sharif –to postpone the beginning of his 18-month sentence until a ruling is made on his appeal, according to Israeli media.

Ynet reported, according to Ma’an, that Azarya was set to start his prison sentence on Sunday March 5, but, with Thursday’s decision, he will remain under “open detention” at his unit’s base, similar to the months he has already spent on open detention.

Ynet quoted the judge as saying, during the hearing, that Azarya “has proven he poses no danger to the public and that there’s no fear he would try to escape justice.”

Though the prosecution initially objected to Azarya’s request, saying “the defendant was convicted of manslaughter, carried out an intentional killing, was motivated by the desire for revenge, broke army orders, violated the army’s values,” it eventually dropped its objection.

Azarya’s lawyer Yoram Sheftel claimed that “nine out of ten soldiers” want Azarya to be released, and went on to note the “massive gap” between the guilty verdict and what “millions of Jews in the state of Israel think.”

Ynet added that the court ordered Azarya’s lawyer to file the full appeal on Sunday, and that a date for the appeal hearing “will be set as soon as possible.”

Azarya is the only member of Israeli forces to be charged with killing a Palestinian in 2016 –when at least 109 Palestinians were shot and killed by Israeli forces and settlers — according to Human Rights Watch (HRW).

Judges called for leniency due, to the fact that it was Azarya’s first time in a “terror situation,” and also noted the alleged mismanagement of the scene by Israeli commanders at the scene, who later went on to give harsh testimonies against the 20-year-old soldier.

After al-Sharif and Ramzi Aziz al-Qasrawi, also 21, allegedly carried out a stabbing attack on another soldier in the southern occupied West Bank city of Hebron last March, al-Qasrawi was fatally shot, while al-Sharif was shot and left severely wounded on the ground for several minutes before Azarya stepped forward and shot him in the head, with a number of witnesses quoting him as saying “This dog is still alive” and “This terrorist deserves to die” before pulling the trigger.

Members of al-Sharif’s family and Palestinian leadership have called the case a “show trial” for handing down a lenient manslaughter conviction for the soldier, while focusing on the case to distract from a wider culture of impunity for Israeli forces.

Following the announcement of the 18-month sentence, the family said they were “not surprised.”

Israeli daily Haaretz quoted them as saying: “from the onset we knew this was a show trial that will not do us justice. Even though the soldier was caught on video and it is clear that this is a cold blooded execution, he was convicted only of manslaughter, not murder, and the prosecution asked for only a light sentence of three years. The sentence he received is less than a Palestinian child gets for throwing stones.”

Al-Sharif’s family has vowed to take the case to the International Criminal Court (ICC).

Meanwhile, a report released by HRW, days before Azarya was convicted, documented “numerous statements” made by senior Israeli politicians and religious figures “calling on police and soldiers to shoot to kill suspected attackers, irrespective of whether lethal force is actually strictly necessary to protect life.”

HRW noted that Israel’s shoot-to-kill policy has received widespread support among Israeli citizens, citing a 2016 poll by the Israel Democracy Institute which found that 47 percent of Jewish Israelis supported the sentiment that “any Palestinian who carries out a terror attack against Jews should be killed on the spot, even if he has been captured and clearly does not pose a threat.”