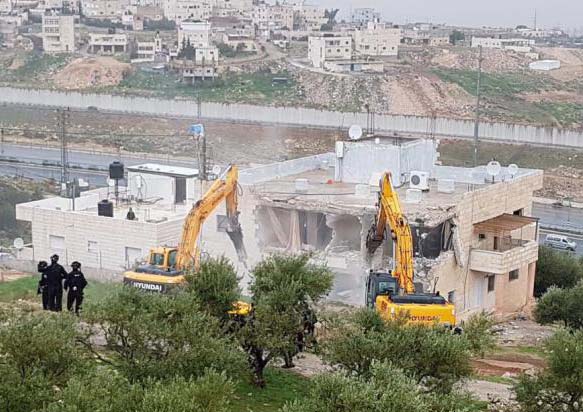 In the West Bank, On 01 March 2017, Sa’di Qaysiyah (25) from al-Thaheriyah village, south of Hebron were killed after an Israeli setter from “Havat Mor” settlement outpost, west of the aforementioned village, opened fire at him.

The Israeli media claimed that Sa’di attempted to stab a settler, who said that “he heard noise in the back of his house. When he went out to see where the noise is coming from, Sa’di who had a knife chased him. The settler then returned inside his house to bring his gun, but Sa’di chased him inside and stabbed him before the settler could shoot him.” There were no local eyewitnesses to confirm or deny the Israeli claim because the crime happened in the abovementioned settlement outpost. Moreover, the Israeli forces took Sa’di’s corpse to an unknown destination.

Shortly after the death of Qaisiyah, Israeli forces closed the southern and western side of al-Thaheriyah village and established checkpoints on all the roads leading and linking this village with other villages. They also carried out a wide-scale search campaign under the pretext of searching for a person, who was with Sa’di. An infantry unit surrounded Kherbet Zanouta and al-Khalil Valley area as they prevented the residents from leaving their residential tents. At approximately 19:00, an Israeli force accompanied with 14 military jeeps moved into al-Deir area. They raided and searched the house of Sa’di’s family, detained them and destroyed the house contents. In the meantime, dozens of young men gathered and threw stones at the soldiers, who immediately fired sound bombs and tear gas canisters at them and the houses in response. Half an hour later, the Israeli forces withdrew from the vicinity of Sa’di’s house after they arrested his cousin Amjad Qaisiyah (24). When the infantry unit arrived at the center of the village near the central market, the unit stopped and its soldiers deployed between streets amidst firing sound bombs and tear gas canisters between the shops. They also detained and kicked a number of workers in some restaurants. According to PCHR’s follow-up, a large number of the infantry units deployed in the center of the village after closing the main road with the military vehciles amidst firing sound bombs and tear gas canisters at the civilians and shops. Furthermore, they forced the shops’ owners to close under threat.

On Thursday, 23 February 2017, at approximately 01:00 am, Israeli forces moved into Nablus and stationed in the vicinity of “Joseph Tomb” in the eastern side of the village, to secure the entry of dozens of buses carrying settlers to the abovementioned area in order to perform their religious rituals. The buses moved from Beit Furik checkpoint, east of the city, towards al Hesbah Street to Balata village. After that, dozens of young men gathered and threw stones and empty bottles at the settlers and buses. The soldiers immediately fired metal bullets, sound bombs and tear gas canisters at the young men and chased them in response. The Israeli soldiers then arrested Mustafa Bilal Abu Shanab (18) and Adam Hasan Abu Jamilah (19).

As part of the aerial bombardment, on 27 February 2017, Israeli warplanes carried out 8 airstrikes. During those airstrikes, 23 missiles were launched at Hiteen military site belonging to al-Quds Brigades; Ajnadin training site for the Palestinian Mujahidin Movement, north of Beit Lahia in the northern Gaza Strip; training site in al-Nussairat; observation point for the Interior Ministry officers in al-Shokah village, east of Rafah in the southern Gaza Strip and agricultural and vacant lands. As a result, 3 officers were wounded while a civilian was moderately wounded. Moreover, those sites sustained damages while a mosque and six houses sustained minor damages.

In the context of targeting the border areas, on 25 February 2017, Israeli forces stationed along the border fence between the Gaza Strip and Israel, east of Kahn Younis in the southern Gaza Strip, opened fire at the agricultural lands, east of al-Farahin area, west of the abovementioned fence.

During the reporting period, Israeli settlers killed a Palestinian civilian, south of Hebron. Meanwhile, the Israeli forces wounded 11 Palestinian civilians, including 4 children and a woman. Six of them and a woman were wounded in the West Bank while 5 others, including a child, were wounded in the Gaza Strip. The Israeli forces continued to chase Palestinian fishermen in the Gaza Sea and open fire at farmers in the border areas in addition to carrying out many airstrikes targeting training sites belonging to the Palestinian armed groups and civilian objects.

On 24 February 2017, a child from Zowaydin village, southeast of Yata, south of Hebron, sustained severe burns after an object from the Israeli remnants exploded near the abovementioned village school. The child was grazing sheep.

On 27 February 2017, Israeli soldiers stationed at Qalendia checkpoint at the northern entrance to occupied Jerusalem opened fire at Manar Mojahed (28) from Kafr ‘Aqab village, north of the city when she was near the aforementioned checkpoint. As a result, she was wounded and then arrested.

On the same day, ‘Abdullah ‘Anati (14) from Sho’afat refugee camp, northeast of occupied Jerusalem, was seriously wounded after being hit with a metal bullet when he was on his way back home from school along with his family.

On 28 February, Israeli forces stationed at Howarah checkpoint at the southern entrance to Nablus opened fire at a Palestinian civilian, who already suffers from a mental disorder. As a result, he was hit with two bullets to the thighs.

A residential building in al-‘Issawiyah was demolished, rendering 14 individuals, including 4 children, homeless.

At approximately 12:45 on Friday, 24 February 2017, Palestinian civilians and International activists organized a protest in the center of Kufor Qaddoum village, northeast of Qalqiliya, and then made their way to the eastern entrance of the village in protest against closing that entrance since the beginning of al-Aqsa Intifada with an iron gate. When the protesters approached the entrance, Israeli forces fired rubber-coated metal bullets, tear gas canisters and sound bombs at them. As a result, Mohammed Helmi Jameel Shtaiwi (11) sustained a metal bullet wound to the neck and a 26-year-old man was hit with a metal bullet to the left leg.

Following the Friday prayer on 24 February 2017, dozens of Palestinian civilians and Israeli and international human rights defenders organized demonstrations in Bil’in and Nil’in villages, west of Ramallah and al-Nabi Saleh, northwest of the city; at the entrance to al-Jaalzone refugee camp, north of the city; and in Kafer Qadoum village, northeast of Qalqiliyah, protesting against the annexation wall and settlement activities. Israeli forces forcibly dispersed the protests, firing live and metal bullets, tear gas canisters and sound bombs. They also chased the protesters into olive fields and between houses. As a result, many of the protesters suffered tear gas inhalation while others sustained bruises due to being beaten up by the Israeli soldiers.

On the same Friday afternoon, the national factions and Defense Committee of Hebron organized a protest titled “Lift up the closure of Hebron…dismantle the Ghetto” on the 23rd anniversary of al-Ibrahimi Mosque Massacre perpetrated by Baruch Goldstein on 25 February 1994 against Muslim worshippers in the abovementioned mosque, killing 29 civilians and wounding 150 others. The soldiers fired live bullets, sound bombs and tear gas canisters at the protestors while they were praying. Moreover, a protest moved from Ali al-Bakkaa’ Mosque towards the settlement outpost known as “Beit Romano” established by the Israeli forces on the rubbles of Osama Bin Monqeth School. Dozens of Palestinian civilians and Israeli and International peace activists, raising the Palestinian flags, participated in the protest. Before they approached the area, the soldiers directly fired sound bombs at them. As a result, many civilians sustained tear gas inhalation and were transferred to the hospitals in the city. The soldiers also attacked and beat the activists, so they sustained bruises throughout their bodies, but no arrests were reported. The Israeli forces then announced the area as a closed military zone.

Also on Friday, 24 February 2017, a number of young men gathered and made their way to the border fence between the Gaza Strip and Israel, northeast of al-Maghazi in the central Gaza strip. They threw stones at the Israeli soldiers. The Israeli soldiers who were behind sand barriers immediately fired live bullets at the protestors. As a result, Mohammed Eyad Mohammed al-Taweel (16), from al-Maghazi, sustained a live bullet wound to the left foot. A PRCS ambulance the transferred him to al-Aqsa Hospital in Deir al-Balah. His wounds were classified as moderate.

At approximately 14:00 on Thursday, 28 February 2017, dozens of students from Birzeit University organized a protest in solidarity with the prisoners on hunger strike in ‘Ofer Prison, west of Ramallah. When the protestors approached the Prisons’ gates, the soldiers fired live bullets, sound bombs and tear gas canisters at them. They chased them and then arrested 6 civilians, including 3 young women. The arrested civilians were identified as Mohammed Eyad Zakarnah (23), Bayan Safi (22), Zainab al-Barguthi (22), Meran Daghrah (23), Ahmed Husam Khader (23), Hasan Abdul Karim Daraghmah (23).

Due to the number and severity of Israeli human rights violations this week, the PCHR made several recommendation to the international community, Among these were a recommendation that the High Contracting Parties to the Geneva Conventions fulfil their obligations to ensure the application of the Conventions, including extending the scope of their jurisdiction in order to prosecute suspected war criminals, regardless of the nationality of the perpetrator and the place of a crime, to pave the way for prosecuting suspected Israeli war criminals and end the longstanding impunity they have enjoyed.

For the full text of the report click here.