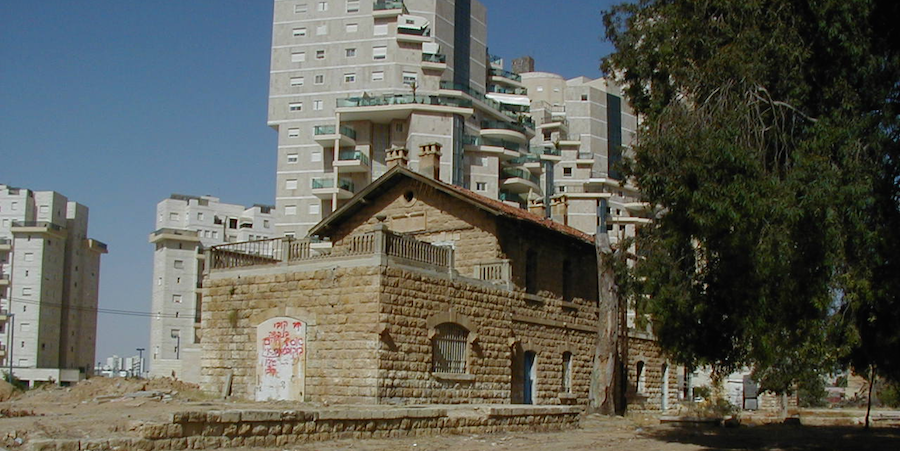 The ‘regularization law’ to sanction land theft in the West Bank has a solid basis: most Israelis live on Palestinian land confiscated in 1948.

The cries of the Cossacks in the West Bank Samarian hills are not meant to arouse compassion in the heart of the average Israeli liberal, who believes that evacuation of all the territories occupied by Israel in 1967 would be a balm on the wounds of her problematic country. Yet, the cries for help coming from the Amona hills’ wailing of the oppression of their residents actually have a solid basis. The revolting regularization law, which is intended to legalize land theft conducted over the Green Line, is simply meant to equalize their situation to that of the rest of Israelis, most of whom enjoy the earlier version of this law, known by the name Absentee Property Law, 1950.

Indeed, residents of settlements and outposts (which are firmly illegal under international law) dispossessed Palestinians from their land – with permission of their state and under protection of its army – and transformed it into their property. What is actually the difference between the settlers and the millions of other Israelis, many of them voters for Meretz, the Zionist Camp and even the Joint List, residing on lands previously lived on by indigenous people who were deported or ran away? A quarter million of the dispossessed are Israeli citizens who were prohibited from returning to their homes, villages, lands and houses of worship.

The “hap neighborhood” (hap, in Yiddish, connotes land up for grabs) was once the name given to areas in Ramat Gan and Givatayim that Jews, whether new immigrants or veteran residents, took over in the early 1930s when rumor spread that there was ownerless land. In retrospect, according to the Online Nostalgia website (Hebrew), it appears these lands actually did belong to several Jewish residents of Egypt who acquired them several years earlier. It took a few good years until “regulating acquisition of the lands and development of the neighborhood was rendered possible.” Nothing new under the sun in the Holy Land.

A huge real estate bonanza fell like ripe fruit into the hands of the Jewish settlers following the occupation of a majority of the land in 1948. Hundreds of thousands of new immigrants – refugees by choice or by force  – from all corners of Europe and the Middle East, who moved or were moved to the state of the Jews around 1948, gained an ‘arrangement.’ The arrangement was immediate: in the abandoned homes for those with luck, connections and correct origin; in temporary transit camps, which were transformed into impoverished neighborhoods, for most others; or faraway in the “periphery” to the latecomers and those without connections. The kibbutzim and moshavim were not neglected either, and Jewish settlers went out there to plow deep into lands not belonging to them. These colonies later became upscale housing developments.

There was a problem with the huge quantity of land up for grabs: a large part of it rightfully belonged to those who became refugees, both within the state and outside of it. Yet the Jewish mind did not disappoint. The best legal thinkers and legislators created a masterpiece entitled the Absentee Property Law, 1950. The law simply ‘gave to Israel’ the property of those who “left it for the territory of enemy countries during the war of independence.” Another miniscule problem was with those who didn’t actually leave the territory of the state but remained in it. Yet the state still coveted their assets: Arab residents of Israel were declared “absent from their lands” for a variety of reasons. “Present absentees” was a term invented just for them – an oxymoron that competes for absurdity with its counterpart, a “Jewish democratic state.”

Years passed, and there was still insufficient land for the descendants of the mass immigrations. The chosen people then won a new land bonanza, a gift of massive military power. Beginning from 1967, there are “occupied territories.” Although a “population” lacking in rights is sitting on these lands, the potential for “hap” neighborhoods with red roofed homes, a regular supply of water, electricity, winding roads and an extensive infrastructure of public services “for Jews only” is seemingly inexhaustible.

“Why should an Arab demand these lands back? What will he do with them anyway?” settler Rabbi Menachem Druckman asks with surprise. He and his rabbi friends – who have already brought a disaster or two upon their flocks – promise to continue “to sacrifice” (who exactly?) for the “ways of the fathers,” a concept dear to both their hearts and their cohorts’ access to bargain housing. Knesset Members Shuli Moalem and Betzalel Smotrich (Jewish Home) are competing over who will shout louder for racist legislation, or in their words for: “a process that will correct an injustice and bring normalization to families.”

Before you call them the necessary names, take a look out the window. Perhaps the trees growing there were planted by people who were removed from here almost seventy years ago. The first “regulation law” guaranteed that they and their descendants would never return here. One who is weary of racist legislation is invited to consider a deep clean, for the time has come.

Ofra Yeshua-Lyth is a member of the Committee for a Secular Democratic State in all areas of historical Palestine.