Erdogan: Netanyahu Is An ‘Oppressor, Cruel, At The Head Of State Terror’ 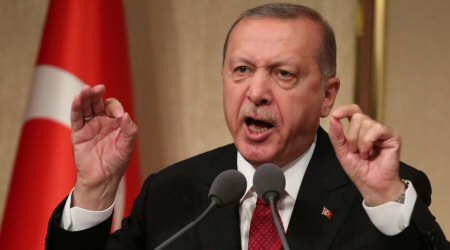 Tensions between Turkey and Israel were ratcheted on Sunday, as Turkish President Recep Tayyip Erdogan declared Israeli Prime Minister Benjamin Netanyahu to be an “oppressor”.

Netanyahu hit back in a speech, later the same day, calling Erdogan an “anti-Semitic dictator” who is “obsessed with Israel.”

Speaking to a group of youngsters, Erdogan said: “Do not kick the enemy you have brought down to the ground. You are not a Jew in Israel,” in an apparent reference to the Israeli occupation of the West Bank and siege of Gaza.

The comments did not go unnoticed in Israel, however, when Netanyahu later criticized Turkey over what he claims to be an occupation of northern Cyprus.

“Erdogan – the occupier of northern Cyprus, whose army massacres women and children in Kurdish villages, inside and outside Turkey – should not preach to Israel,” Netanyahu tweeted.

This was swiftly met by reply from Ibrahim Kalin, one of Erdogan’s top aides.

“Bashing Erdogan or using Kurds as a political chip will not save [Netanyahu] from his domestic troubles,” Kalin wrote, according to Days of Palestine.

The Israeli prime minister has recently seen his cabinet rocked by the departure of Defense Minister Avigdor Lieberman, with Israel soon to be pushing towards early elections, as a result.

Netanyahu is also facing multiple allegations of corruption in several cases leveled against him.

“You are an oppressor, cruel and at the head of state terror,” Erdogan told the Israeli prime minister during a televised speech, in Istanbul.

On December 14, Erdogan said Palestinians were subjected to “pressures, violence and intimidation policies no less grave than the oppression done to the Jews during the Second World War,” referring to the Holocaust.

The Turkish president has previously called Israel “the world’s most fascist and racist state”.

In May, Ankara ordered the Israeli ambassador out of Turkey, in response to Israel’s killing of Palestinian protesters in the Gaza Strip.

Turkey is one of the only countries in the world which has been frankly supporting of the Palestinian cause and recognized Israel as an occupation state. Current Turkish leaders refuse to forget Israel’s crimes against thousands of the indigenous inhabitants of Palestine.