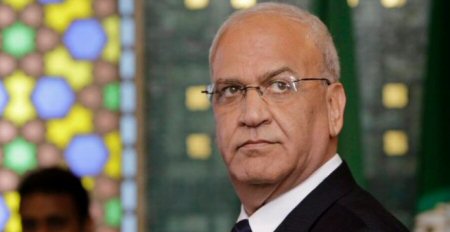 On Saturday, October 20, at around 7:00 pm, three vehicles carrying Israeli occupation authorities intercepted the car of the governor of Jerusalem, Mr. Adnan Gheith, pulling him out of the vehicle and taking him to an unknown location. Governor Gheith was in Beit Hanina, north of Jerusalem, at the time of the abduction. Now, Governor Gheith has been transferred to the Ofer Detention Center, Prison and Military Court, in the occupied West Bank village of Beitunia.

“This is a new step taken by the Israeli Occupation against the Palestinian presence in Jerusalem,” PLO Secretary General Dr. Saeb Erekat said in a statement, according to the PNN.

“Israel is further violating its own commitments and obligations regarding Palestinian institutions in the city. Since August 2001, when Israeli commandos closed the Orient House, in Jerusalem, dozens of Palestinian institutions have been closed in an attempt at provoking a Palestinian politicide in Jerusalem. The threats and detentions against Palestinian political and community leaders, including the abduction of Governor Gheith, should only be taken as part of Israel’s plan to eliminate any foundations for a political solution based on two-states on the 1967 border,” Erekat added.

After the Trump Administration’s illegal recognition of Jerusalem as Israel’s capital, the Israeli government has escalated its aggression against the Palestinian people, including in and around the occupied Palestinian capital, Erekat said. “This includes forcible transfer of civilian population, home demolitions, colonial-settlement expansion and persecution of Palestinian civil society and political leaders.”

“We call upon the international community to take a firm stand on the case of Governor Gheith as well as on the issue of the Palestinian institutions. East Jerusalem remains occupied under international law, with Israel, the occupying power, not having any right to disrupt the Palestinian political, economic, cultural and social life in the city. We consider the abduction of Governor Gheith not only to be a further Israeli violation and aggression against the Palestinian people but a reminder to the international community of the need to take concrete measures to save East Jerusalem, the capital of the State of Palestine.”

The Palestinian Prisoners and Ex-Prisoners commission has submitted a request to the Ofer Military Court, demanding release of the governor of Jerusalem, Adnan Gheith, who was kidnapped yesterday, by Israeli intelligence, in the Beit Hanina area of ​​Jerusalem.

The Commission explained that it applied for the urgent release of the governor Gheith, after the decision of the occupation to extend his detention for 96 more hours, and transferred  him to Ofer military court to be presented to a military judge.

The purpose of the request for the urgent release is to extract a decision to present Governor Gheith to the court in the coming hours, and to prevent the opportunity of procrastination by the occupation until the extension period expires 96 hours (4 days).