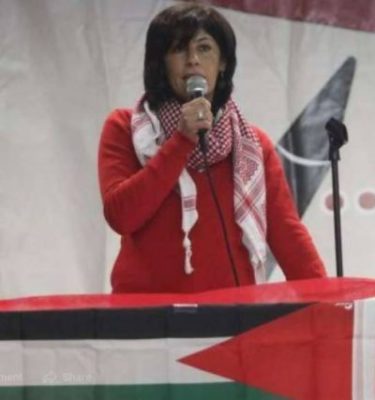 The Palestinian Ministry of Women’s Affairs issued a statement strongly denouncing the continued imprisonment of Jarrar, holding her captive under arbitrary orders without charges or trial.

The Ministry said that “Israel continues to violate the basic principles of International Law, and all related human rights resolutions,” and condemned the ongoing abduction and imprisonment of many elected legislators, and political leaders.

It also denounced the escalating violations targeting the detained women and children in occupied Palestine, and called on the International Community to intervene and expose the Israeli crimes.

The Ministry also stated that the Palestinians are ongoing with their revolution to achieve freedom and independence, despite Israel’s escalating crimes against them, and their lands.

Legislator Jarrar, the chairwoman of the Union of Palestinian Women’s Committees, is a senior political leader of the leftist Popular Front for the Liberation of Palestine (PFLP), a former executive director of the Addameer Prisoner Support and Human Rights Association, and a current member of its board.

It is worth mentioning that the Israeli authorities have issued, Sunday, 40 Administrative Detention orders against Palestinian detainees; 32 of the issued orders were renewal of existing orders, and the remaining are first-time orders.

The Ad-Dameer Association has reported that Israeli is holding captive 5640 Palestinians, including 53 women and 270 children; 50 of the children are under the age of 16.

It added that among the 5640 detainees are 465 who are imprisoned under the arbitrary Administrative Detention orders, without charges.