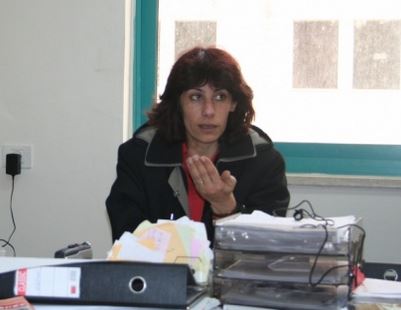 Israeli soldiers invaded, earlier on Thursday at dawn, the home of leftist legislator, Khaleda Jarrar, in the central West Bank city of Ramallah, and kidnapped her.Media sources in Ramallah said at least sixty Israeli soldiers, and security officers, invaded Ramallah, before storming into the home of the feminist leader, and prominent human rights advocate, and violently searched her property, before kidnapping her.

The sources said the soldiers kicked down the door of Jarrar’s home, and held her husband in a separate room, while searching the property, and kidnapped the legislator.

Jarrar is also a senior political leader of the Popular Front for the Liberation of Palestine (PFLP), former executive director of the Addameer Prisoner Support and Human Rights Association, and a current member of its board.

The Legislator is also the chairwoman of the Prisoners’ Committee of the Palestinian Legislator Council (PLC).

The Palestinian Prisoner Solidarity Network has reported that Israel has been denying Jarrar the right to travel outside of Palestine since 1988, and that, in 2010, it took a public campaign lasting for six months before the Israeli Authorities allowed her to travel to Jordan for medical treatment.

On August 20 2014, Jarrar received an Israeli military order instructing her to leave Ramallah to Jericho, within 24 hours http://www.imemc.org/article/68898, but in September of the same year, the legislator managed to overturn the order.
Her abduction now raises concern that the Israeli Authorities might be planning to force her out of Ramallah, or to imprison her for an extended period.