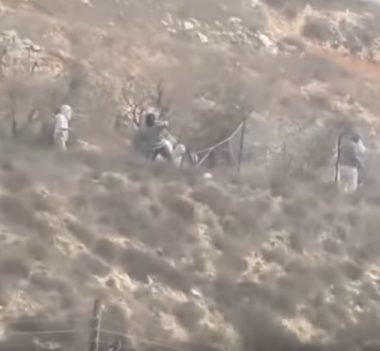 Several illegal Israeli settlers were videotaped, Saturday, throwing rocks at Palestinians in the village of Burin, southwest of the northern West Bank of Nablus.

They were seen throwing rocks at residences in the Nablus Governorate under the cover of Israeli forces whom stood guard for the colonizers.

Quds News Network said the Palestinians were harvesting their olives when the settlers attacked.

Yahia Qadous, the head of the Local Village Council in Burin, said the assailants came from Yitzhar colony, which was built on private Palestinian lands, in the southeastern area of the village.

Qadous added that the Palestinians tried to remove the invading colonists, while the soldiers attacked them with gas bombs