Erekat: “Trump And Netanyahu Continue To Act On Destroying Peace” 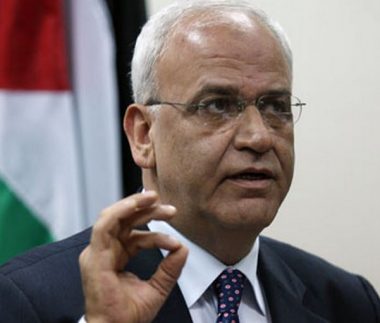 The Secretary of Palestine Liberation Organization (PLO), Dr. Saeb Erekat, stated that U.S. President Donald Trump, and Israeli Prime Minister Benjamin Netanyahu, are ongoing with their politics to destroy the two-state solution, and replace it with their own facts on the ground, in violation of International Law.

His statement came during meetings with Deputy Diplomatic Counselor at the French Presidency Aurélien Lechevallier, in addition to the French Consul-General in Jerusalem Pierre Cochard, and the Swiss Representative in Palestine.

Erekat stated that all the international efforts to achieve peace, and get the political process started, will not be effective in resolving the situation, and added that peace cannot be achieved by the ongoing theft of Palestinian lands, and denying basic rights of the Palestinian people.

He thanked France and Switzerland for their positions, rejecting Trump’s hostile stances and policies against the Palestinian refugees and the UNRWA, and the closure of the Palestinian Representative office in DC.

Erekat also thanked them for their countries’ positions in support of the two-state solution.

The official also called on Switzerland, as the country that hosted the Geneva Accords of 1948, to save the Fourth Geneva convention of 1949, especially the call for protecting the civilians in time of war.

As for the internal Palestinian issues, especially reconciliation talks, Erekat said that all parties must fully implement the Cairo Agreement of October 2, 2017, which was sponsored by Egypt.

Commenting on Netanyahu’s statements regarding full normalization with the Arab countries before reaching a comprehensive peace agreement with the Palestinians, and the withdrawal from the occupied territory, including Jerusalem and the Golan Heights, Erekat said that “Netanyahu is just hallucinating.”