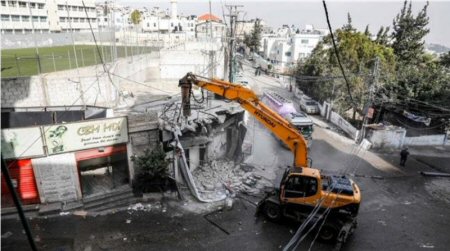 The European Union condemned, on Saturday, the Israeli demolition ‎of some 20 commercial structures in Shu’fat Refugee Camp of occupied East Jerusalem, stressing its part of “illegal expansion of Israeli settlement.”

On Wednesday, the Israeli occupation demolished buildings as part of the Jerusalem ‎municipality’s policy of expanding enforcement with ‎respect to illegally-built structures. ‎

In a statement, the Israeli occupation municipality said that “it will continue to carry out activities with ‎the support of the police against illegal businesses in the different ‎areas.”‎

The EU, however, linked the operation to a recent decision by ‎the Jerusalem Planning and Building Committee, which earlier this month approved ‎the construction of hundreds of new settlement units in the illegal settlements of Gilo and ‎Ramat Shlomo.‎

‎”Last week, Israeli authorities demolished some 20 Palestinian ‎commercial structures in the Shu’fat Palestinian refugee camp in ‎East Jerusalem,” a spokesperson at the Office of Foreign Affairs and Security ‎Policy at the EU‎ said.‎

He added, according to Days of Palestine: “The demolition started several weeks after the ‎Jerusalem Municipality decided to promote a plan to build 800 ‎housing units in the Israeli settlements of Gilo and Ramat Shlomo, in occupied east ‎Jerusalem.

“The European Union strongly opposes the policy of Israeli ‎settlements, which is illegal under international law, and the actions ‎taken in this regard. The European Union expects the Israeli ‎authorities to reconsider and revoke these decisions. ‎

‎”The policy of settlement construction and expansion in east ‎Jerusalem continues to undermine the possibility of a viable two-‎state solution, with Jerusalem as the future capital of both states, ‎which is the only realistic way to achieve a just and lasting peace.”

Despite the fact that the demolition took place against the will of the Palestinian residents and was carried out as part of the Jerusalem Municipality’s ‎ongoing attempts to Judaize the city.