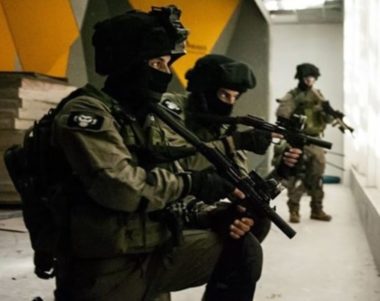 They added that the soldiers then stormed the building and searched it, but realized that Ashraf was not there.

The Israeli army has been constantly on the search for Ashraf Na’alwa, from Shweika village, in the northern West Bank governorate of Tulkarem, since he carried out a fatal shooting in Burkan Israeli colony, on October 7th, 2018, killing two settlers.

The two Israelis, who were killed in the shooting, have been identified as Kim Levengrond Yehezkel, 28, from Rosh HaAyin, and Ziv Hagbi, 35, from Rishon LeZion.

Since then, the army constantly invaded his family’s homes, and homes belonging to his siblings, relatives and friends, and frequently abducted many of them, including his mother, father, sister and brothers.

On October 15th, dozens of Israeli soldiers invaded his home, and handed his family an official order for the demolition of their home.