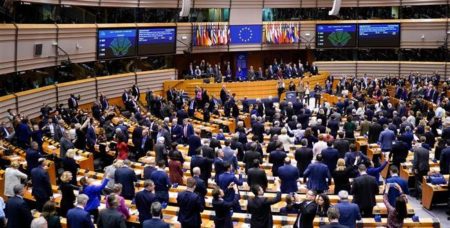 An overwhelming majority of the European Union’s parliamentary lawmakers have censured a US-devised Middle East proposal on the Israeli-Palestinian conflict, saying the contentious plan flies in the face of international law.

During a session in Strasbourg, on Tuesday, EU lawmakers said the plan that the administration of US President Donald Trump has drawn up, in cooperation with Israel, runs contrary to international law and is biased towards Tel Aviv.

Dutch MEP Kati Piri denounced the American scheme as ‚Äúone-sided, illegal and intentionally provocative,‚Äù adding that it is aimed at ‚Äúlegalizing settlement and annexation of the West Bank,‚Äù while risking¬Ý ‚Äúmore suffering for the Palestinian people.‚Äù

What the US president calls the ‚ÄúDeal of the Century‚Äù is ‚Äúa cynical plan of two far-right leaders seeking support ahead of elections,‚Äù she stressed, referring to Trump and Israeli Prime Minister Benjamin Netanyahu.

Similarly, Spanish MEP Manu Pineda called the US proposal the ‚ÄúFraud of the Century.‚Äù

Belgian MEP Hilde Vautmans also urged the EU to use its ‚Äúcredibility to intervene as an honest broker‚Äù and EU foreign policy chief Josep Borrell to initiate a peace conference.

Only a small number of lawmakers backed Trump‚Äôs plan, during the debate.

Slovenian politician Tanja Fajon warned that the ‚ÄúEU should not reject the deal because it hates Trump.‚Äù

EU foreign policy chief Josep Borrell also addressed the session, saying Israel‚Äôs possible annexation of the Jordan Valley under the plan ‚Äî drawn up by the US administration, in cooperation with Israel ‚Äî could fuel Palestinian anger and protests.

‚ÄúThis may happen ‚Ä¶You can be sure it‚Äôs not going to be peaceful,‚Äù he said.

‚ÄúThe proposals tabled two weeks ago clearly challenge the internationally agreed parameters. It is difficult to see how this initiative can bring both parties back to the table,‚Äù he said. ‚ÄúI made this point to my (US) interlocutors: we need to ask ourselves whether this plan provides a basis for progress or not.‚Äù

‚ÄúThis means a two-state solution based on the parameters set, in the Council Conclusions of July 2014, that meets Israeli and Palestinian security needs and Palestinian aspirations for statehood and sovereignty, ends the occupation that began in 1967, and resolves all permanent status issues in order to end the conflict,‚Äù he added.

Trump released his controversial deal on January 28, during an event at the White House, alongside Netanyahu, in Washington.

The so-called ‚ÄòVision for Peace‚Äô ‚Äî which all Palestinian groups have unanimously rejected ‚Äî bars Palestinian refugees from returning to their homeland while enshrines Jerusalem al-Quds as ‚ÄúIsrael‚Äôs undivided capital‚Äù and allows the regime to annex settlements and the Jordan Valley.

He said that the proposal would bring neither peace nor stability and would rather leave the Palestinians with a state resembling ‚ÄúSwiss Cheese.‚Äù

Meanwhile, a poll conducted by the Ramallah-based Palestinian Center for Policy and Survey Research (PCPSR) found that 94 percent of Palestinian people are against the US initiative and only 4 percent support it.

According to the survey, the results of which were published on Tuesday, 64 percent of the Palestinians believe that the US plan should be met with an armed intifada (uprising).

« Adalah: Over 2,000 Bedouin Preschoolers Stuck at Home due to School Bus Budget Dispute Israeli Soldiers Prevent Activists From Planting Olive Trees In The Village Of Yasuf »