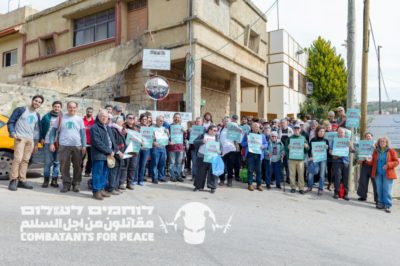 Combatants For Peace (CFP) Activists participated, Friday, in a volunteer day to plant olive trees on the lands owned by Yasuf village farmers, near Salfit in central West Bank.

As the activists’ bus from Tel Aviv reached the entrance of Yasuf, the Israeli soldiers closed the street leading to the village and prevented them from entering.

After being stopped and questioned by the soldiers for a long time, the activists managed to reach the village, where the residents welcomed them at the Village Council.

The activity, which is organized by “Stand Together” and “Rabbis for Human Rights”, and aims at supporting the resilience of Yasuf village farmers who face escalating attacks by illegal colonialist settlers, and the Israeli occupation confiscation of their lands.

The activity ended with speeches delivered by CFP peace activists and rabbis for human rights, who supported the rights of the Palestinian people in an independent state and an end to the occupation.