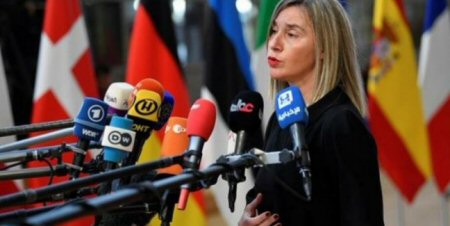 The European Union’s foreign policy chief Federica Mogherini has once again expressed the 28-nation bloc’s disapproval of the Israeli regime’s claim of “sovereignty” to Syria’s Golan Heights and other Tel Aviv-occupied territories.

Speaking at the plenary session of the European Parliament, in the French city of Strasbourg, on Tuesday, Mogherini stressed that the EU’s position on the status of Golan “has not changed.”

“The EU has a very simple and clear position,” she said. “The EU does not recognize Israeli sovereignty over any of the territories occupied by Israel since June 1967, in line with international law and with UN Security Council Resolutions 242 and 497. And this also applies to the Golan Heights.”

The EU’s top diplomat also noted, according to the PNN, that she had already issued a declaration on behalf of all the 28 member states and clarified their stance on the Golan Heights.

Additionally, she said, the five EU member states of the UN Security Council – including the UK, France, Germany, Belgium and Poland – had expressed the bloc’s common position on Golan in a joint stake-out.

Israel seized the Golan Heights from Syria in the closing stages of its 1967 Six-Day War with Arab countries, which also saw the regime occupy the Palestinian territories of the West Bank, East Jerusalem al-Quds and the Gaza Strip.

Tel Aviv unilaterally annexed the Golan Heights in 1981, in a move not recognized internationally.

Syria has repeatedly reaffirmed its sovereignty over the Golan Heights, saying the territory must be completely restored to its control.

On March 25, US President Donald Trump signed a decree recognizing Israeli “sovereignty” over the occupied Golan at the start of a meeting with Israeli Prime Minister Benjamin Netanyahu, in Washington.

Trump’s controversial policy shift came over a year after the hawkish US president recognized Jerusalem al-Quds as the “capital” of Israel and transferred Washington’s embassy from Tel Aviv to the occupied Palestinian city.

Emboldened by Trump’s highly anti-Palestine agenda, Netanyahu has talked of plans to annex the occupied Palestinian region of the West Bank.

Elsewhere in her speech, Mogherini complained that Israel’s settlement construction activities in the occupied Palestinian lands were eroding any prospect of a two-state solution.

After a recent announcement by Israel to build 4,600 new settler units, the EU emphasized that it considered “all settlement activity illegal under international law, and that settlements erode the viability of the two-state solution,” she said.

“And in fact, the two-state solution is not only fading away. It is being dismantled piece by piece,” she added, warning that abandoning the solution would bring greater chaos, not only to the occupied territories but also to the entire Middle East.

Israel has over the past months stepped up its settlement construction activities in the occupied lands in defiance of United Nations Security Council Resolution 2334.

About 600,000 Israelis live in over 230 settlements built illegally since the 1967 occupation of the Palestinian lands.