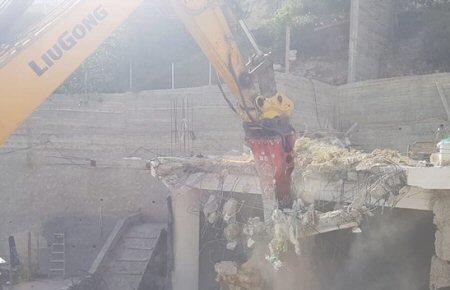 Israeli bulldozers, on Wednesday morning, demolished a Palestinian house and a number of storehouses in the East Jerusalem neighborhood of Silwan.

WAFA correspondence said that dozens of Israeli police cordoned off the Wadi Yasul area, in Silwan, and deployed in the alleyways, as the municipality bulldozers proceeded to demolish the house and storehouses under the pretense of being built without a rarely-issued Israeli license.

Local Palestinians scuffled with police and attempted to prevent the demolition, but they were assaulted by police officers. Several Palestinians sustained injuries as a result of the police assault.

The owner of the demolished structures was identified as Izz al-Deen Barqan.

The demolition took place three days after an Israeli court rejected an appeal submitted by the homeowners against the planned demolition.

Israeli courts, seen as the last judicial recourse against demolitions, in fact are complicit in perpetuating the Israeli policies of forcible transfer against Palestinians.

They are also discriminated against in all aspects of life including housing, employment and services, and are unable to access services in the West Bank due to the construction of Israel’s separation wall.

Sources added that, during the demolition campaign, Israeli forces physically assaulted Silwan residents, including women and children.
Earlier this week, the Israeli Supreme Court rejected an appeal by Palestinian families from Silwan, allowing the demolition of 500 homes and commercial buildings, which were built without an Israeli-issued permit, to take place.

The residents built these 500 homes and commercial buildings about 30 years ago, without the nearly-impossible to obtain Israeli permit.
The Supreme Court’s decision will most probably affect the fates of hundreds of Palestinian families, who will be left homeless following the demolitions.