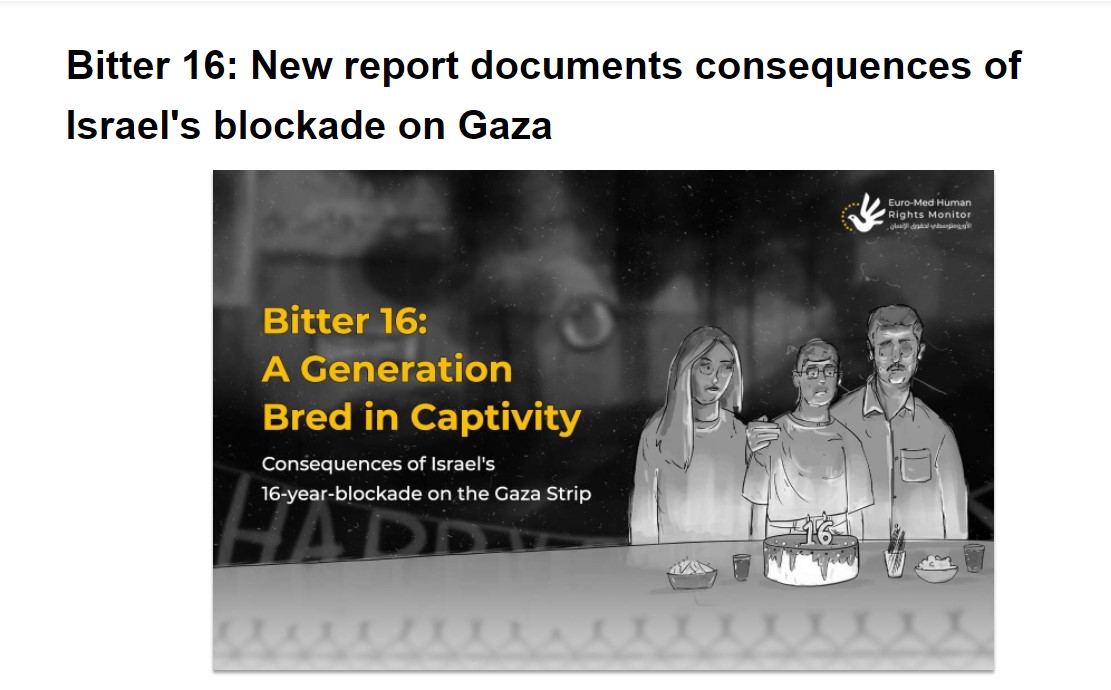 About 1.5 million of the Gaza Strip’s total population of 2.3 million have become impoverished due to the Israeli blockade and restrictions imposed on the Strip since 2006. Euro-Mediterranean Human Rights Monitor called on the international community to pressure Israel to end its illegal blockade.

As the Israeli blockade enters its seventeenth year, Euro-Med Human Rights Monitor documented in its annual report, titled Bitter 16: A Generation Bred in Captivity, the dire effects of the blockade on the social, economic, and humanitarian levels, which were exacerbated by the repeated military attacks on the Strip— the most recent of which was in May 2021.

Despite the deterioration of the humanitarian situation in the Strip and the succession of seven Israeli governments since the beginning of the blockade, the Israeli collective punishment policy against the population in Gaza remains in place, in a way that clearly exposes Israel’s intention to inflict great material and moral damages on the residents of Gaza.

The report documented the multiplication of indicators of the humanitarian crisis in Gaza due to the blockade. For instance, the unemployment rate has risen from 23.6% before the imposition of the blockade in 2005 to 50.2% at the end of 2021—one of the highest in the world.

The report also reviewed the state of economic collapse Gaza suffers due to the blockade. Gaza’s economy has been crippled since the beginning of the blockade with the almost complete closure of commercial crossings, paralyzing the economic movement, especially during the Israeli attacks over the past three decades. In addition, Gaza’s contribution to the overall Palestinian economy has shrunk by half to reach no more than 18% in 2021.

The health sector is one of the most affected by the blockade since Israel prevents or limits the entry of medicines and medical supplies into Gaza, causing health care services to decline by 66%, according to the report.

As for the freedom of movement, the report indicated that Israel only allows limited—mostly humanitarian—cases to move through the Erez Crossing, which is the only Israeli crossing designated for the entry and exit of individuals to and from Gaza.

According to the Gisha, the monthly average of cases Israel allowed to exit through the Erez Crossing was 30,000 cases before the blockade was imposed. The average fell by 70% since then, to reach 8,954 cases a month.

The report called on Israel to end its blockade on Gaza, allow Palestinians to exercise all their rights—foremost of which is freedom of movement—and stop collectively punishing civilians.

The international community should compel Israel, as an occupying power, to respect the rights of all Gazans in accordance with the relevant international norms and set aside the economic, health, food, infrastructure, and other sectors.

The International Criminal Court should open investigations against Israeli leaders and soldiers involved in the collective punishment and military attacks against Gaza to achieve accountability in accordance with international justice standards.