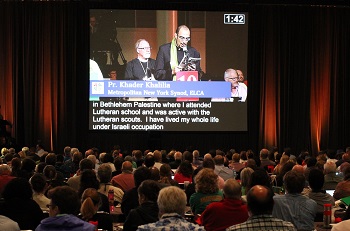 by Anna Baltzer, US Campaign to End the Occupation

On Friday, the Evangelical Lutheran Church in America (ELCA) voted overwhelmingly — by an estimated 90% — to create an investment screen that would identify and remove the Church’s investments in corporations profiting from Israel’s violations of Palestinian rights, and other human rights abuses around the world.

The new screen has a broad reach, ensuring that the Church would avoid investments in corporations currently complicit in human rights violations as part of the Israeli occupation, as well as any future corporations that become complicit.

“As a Native woman, the situation in Palestine reminds me of what my people have gone through here in America. I have seen my people lose our land, our lives, our culture — our songs, dances, spiritual ways. Like the Palestinians, we have no justice. Treaties have been broken… We talk about loving our neighbor. We talk about justice. But where is the justice?… Now is the time for the church to stop profiting from these injustices. Now is the time to bring healing, to bring peace, to bring justice.”

– See more at the US Campaign to End the Occupation website