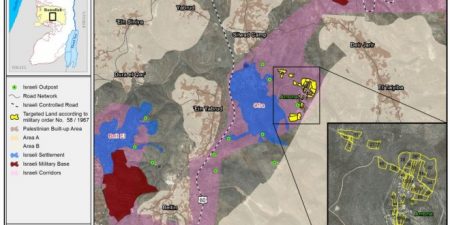 Israeli authorities, on Tuesday, ordered the eviction of the illegal Amona Israeli colonialist outpost within 48 hours, in preparation to demolish it by Febrary 8.
Amona, located near the West Bank city of Ramallah, was built on privately-owned Palestinian land, where 40 settler families are currently living.
The court ruling came after Palestinians successfully petitioned Israeli courts for the outpost’s removal.
the Palestine News Network (PPS) reports that, according to i24 news,  a leaflet posted at the outpost on Tuesday morning informed the settlers that they are required to move out by midnight Wednesday, 48 hours after the decree was issued at midnight Monday. The army is to bar entry to the premises after this time.

Colonist settlers claim they were only informed of the order on Tuesday morning; the order permits them to petition the army within 48 hours.

Israel’s Supreme Court had ordered that the outpost be demolished by December 25, 2015, but after the residents reached an agreement with the Israeli government to relocate, the demolition date was postponed by 45 days.

Israeli settlements, including those referred to as cities, built in the occupied West Bank are illegal under International Law, and the Fourth Geneva Convention.

There are some 120 colonialist outpost to which successive Israeli governments have turned a blind eye or given them indirect approvals.

Last year, the Israeli Information Center for Human Rights In The Occupied Territories ({B’Tselem) has reported that there are an estimated 547,000 settlers in the West Bank.

This figure is derived from two sources: According to data provided by Israel’s Central Bureau of Statistics (CBS), at the end of 2013, 350,010 people were living in the settlements of the West Bank, excluding East Jerusalem.

According to data provided by the Jerusalem Institute for Israel Studies, the population of the Israeli neighborhoods in East Jerusalem numbered 196,890 people at the end of 2012.