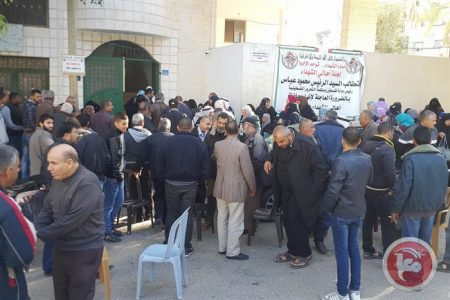 Dozens of relatives of Palestinians killed during the 2014 Israeli military offensive on the Gaza Strip broke into the office of Palestine TV, on Tuesday.

A spokesperson for the committee of slain Palestinians’ families, Alaa al-Birawi, told Ma’an News Agency that the family members entered the building in the Tal al-Hawa neighborhood of Gaza City, demanding to be given an opportunity to appear live on Palestine TV and discuss their demands to the Palestinian Authority.

One day earlier, members of the committee had shut down an office of the Palestine Liberation Organization (PLO) Association, for the families of the wounded and martyrs, to protest the national organization’s failure to transfer allowances.

Al-Barawi added that the families threatened to shut down the office if their demands were not met.

A source in Palestine TV’s Gaza City office confirmed that live transmission from Gaza had stopped as a result of the situation.

They added that Palestine TV executives had suggested that families record their demands and appeals to be aired later, but that the relatives refused.

According to a PLO official, 2,000 families were still eligible to receive allowances more than two and a half years after the devastating Israeli offensive on Gaza as a financial compensation for the deaths of their relatives.

A recent report adopted by the Parliamentary Assembly of the Council of Europe last week stated that the humanitarian situation in Gaza had “significantly worsened” since 2014, adding that 17,650 families, amounting to some 100,000 people, were displaced by the conflict.

At least 142 Palestinian families have lost three or more members in attacks on residential buildings during the Israeli assault, the UN reported, adding that there were credible allegations that the incidents amounted to war crimes.

The Gaza Strip has suffered under an Israeli military blockade since 2007, when Hamas became the ruling party in the territory. Residents of Gaza suffer from high unemployment and poverty rates, as well as the consequences of three devastating wars with Israel since 2008.

The UN warned in 2015 that the besieged Palestinian territory could become “uninhabitable” by 2020 due to the crippling situation for Gaza’s more than 1.8 million inhabitants.