Explaining the Term “Critical Condition” to an Eight-Year Old: Is There a Way? 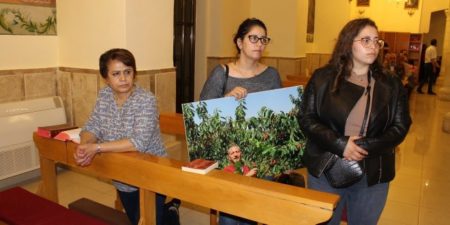 Rita, a beautiful 8-year-old girl asks her mother to explain to her what does “critical condition” mean? Rita wanted to know more than what Wikipedia provides as definition of the word, as she tried to figure it out on her own.

This little girl was earlier informed of the reason her dad never came back to pick her up from school, on September 25, and that he was taken to hospital, and now “critical condition” is the description she hears about him. All she knows is that he was fine when he dropped her off at school, on the morning of that day.

Noura stares at her daughter’s face speechless, not being able to explain the meaning of the word to her. “I did not know what to tell her”; the words would not come out.

In sincere prayers, several Palestinian churches held mass to pray for Samer Arbeed, the 44-year-old Palestinian from Ramallah who was kidnapped from his car on September 25th, 2019, by four armed Israeli men, in front of his wife.

Since then, Samer has not been seen by his family and is presently being hospitalized as a result of being severely tortured while in Israeli custody.

“Samer is a kind father and a devoted husband. He also takes care of his old mother and sick brother,” she spoke with eyes full of tears. He is also an active member in Palestinian NGOs, one of which is the Civil Society Team for Enhancing Public Budget Transparency.

It is worth noting that Samer was arrested on August 26th, 2019 when heavily-armed Israeli soldiers raided his house, late at night, and abducted him in front of his wife and children. He was detained for nearly a week with no charges, after which he was released by a court order.

His abduction on the 25th of September was just as abrupt and traumatic for the family, with much more dire consequences and no end in sight.

Samer and Noura had dropped off their children at school and were on their way, when they noticed that they were being followed.

As their car stopped, four armed men attacked Samer by harshly beating him on the neck and other parts of his body before kidnapping him. Two hours later, Noura was also taken and detained at an Israeli checkpoint near the town of Qalandia.

In addition, Israeli soldiers raided Samer and Noura’s house in their absence and wrecked their belongings.

“Only God and Israeli officials know what happened between the 25th until the 27th of September, the date Samer was transferred to the Hadassa Hospital and placed under strict security measures, including being denied access to his lawyer,” Noura stated.

According to his lawyer, Samer began to experience severe chest pains and constant vomiting the following day, after his arrest. He repeatedly made complaints to the judge, but was completely ignored by the Israeli court.

In regard to visitations: as of this statement, Samer’s wife, Noura continues to be denied visitation rights to see her husband, even while in the hospital. In addition, she says that his medical condition is being kept a secret: “The occupation is not allowing us to examine his medical condition and refuses to issue a medical report concerning his condition.”

Noura fears for her husband’s life and holds the Israeli authorities responsible. Her other fear is for her children who have been subjected to witnessing a brutal attack on their father, by the Israeli occupation authorities. Despite all of the above, she remains hopeful that justice will prevail and that her family will be reunited: “With all my heart, I pray that he will recover soon and come back home and be with his children.”

We also call on the international community to put pressure on Israel to end these practices that break the prisoner’s spirit. This policy was applied not only to Samer Arbeed, but to a number of Palestinians who were arrested with no news about their status, and death was the end result, at the time. According to the Palestinian Society Prisoner’s Club (NGO) 73 prisoners were killed due to torture in Israeli jails, since 1967.

“For years, the Israeli establishment has tried to conceal what happens in interrogation rooms. When interrogators use torture — or ‘special means,’ to use the establishment’s term — the concealment efforts are redoubled. Even when testimony of torture reaches the public, the system does everything it can to leave the interrogators’ role in darkness, including signing lenient plea bargains with suspects who were tortured to ensure that the conspiracy of silence remains unbroken,” as reported by Haaretz.

In 1999, the High Court of Justice banned torture, which was permitted until then. But, subsequent regulations issued by the Attorney General Elyakim Rubinstein legitimized using it with approval by senior officials.” An investigative report by Haaretz, in May of 2015, found that use of torture was on the rise.

The legally-sanctioned torture of Samer, during interrogation, further exposes the complicity of the Israeli authorities, including its judiciary, in a systematic violation of the human Right to be Free from Torture. “It is utterly outrageous that the use of torture during interrogations continues to be sanctioned by the Israeli authorities,” as stated by Amnesty International.

Also, under international treaties, which legally bind Israel, “the use of torture is not to be justified under any circumstances.” Samer’s case is but one example which shamefully exposes Israel’s judiciary’s claim of upholding human rights treaties.

Palestinian civil society and human rights organizations have issued an appeal to organizations international bodies worldwide, as well as to the UN Secretary General and other United Nations committees and agencies, to put greater efforts to end torture applied on Palestinians by the Israeli occupation.

The organizations also called for the immediate release of Samer Arbeed, in addition to holding Israeli occupation authorities accountable for all their crimes against Palestinians, as stipulated in Articles 146 and 147 of the Fourth Geneva Convention.