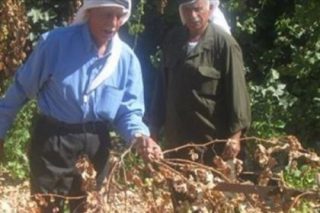 A number of extremist Israeli colonists destroyed, Monday, several grapevines, a shed and uprooted plants, belonging to a Palestinian farmer in the Zeitouna area, isolated, between the illegal Israeli colonies of Daniel and Eliezer, built on Palestinian lands, in al-Khader town, south of the West Bank city of Bethlehem.

Ahmad Salah, the coordinator of the Popular Committee against the Wall and Colonies in al-Khader, said the assailant broke the main gate leading to the Palestinian land, uprooted grapevine shrubs and cut their arbors.

“This was not the first attack of its kind; the area has been subject to constant similar assaults,” he said, “They want the Palestinian to abandon their lands in order to expand the illegal colonies that surround them.”