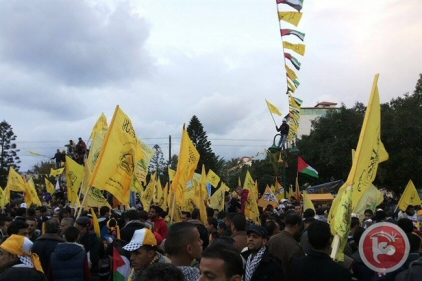 Ten Fateh-affiliated Palestinians were injured on Sunday, when unidentified gunmen attacked a meeting for the political party’s internal elections in the eastern Gaza Strip.

A Fateh leader in the besieged coastal enclave and in charge of the internal elections, Nayif Khuweitir, told Ma’an News Agency that the voting process started at 1 p.m at Moonlight Hall in the al-Zaytoun neighborhood of Gaza City, and went on “smoothly” for about two hours.

At around 3 p.m, he said, gunmen attacked the election center with firearms, sharp weapons, and bats.

Khuweitir identified one of the injured as Hussein Khuweitir, who received a gunshot to the foot and a stab wound to the head.

Fateh leadership in the Gaza Strip denounced the attack, describing it as “unrepresentative” of the values of Fateh and the Palestinian people. Such behavior, a statement by Fateh added, serves only “enemies of the Palestinian national project,” and those who don’t want Fateh movement to progress.

The statement did not give more details about the attackers, but implied that a breakaway faction of the Fateh movement was behind the attack.

The most prominent former Fateh leader is Muhammad Dahlan, who was Fateh’s leading figure in the Gaza Strip before 2007. Dahlan was excluded from Fateh in 2011 over allegations of being involved in the death of Palestinian President Yasser Arafat and in high-level corruption.

The Fateh statement did not say that it suspected Dahlan supporters of being behind Sunday’s attack.