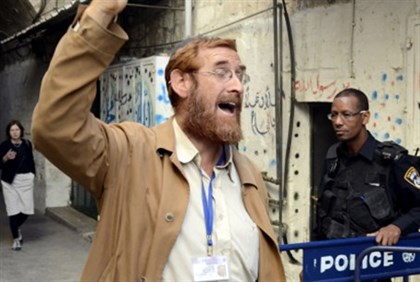 The Israeli Knesset issued, on Sunday, urgent instructions to tighten security measures around MP and Likud member, Yehuda Glick,  after viewing  a video depicting the process of targeting him in the south of the occupied West Bank city of Hebron.

The analog video shows the infiltration of fighters into the settlement of “Otniel”, inhabited by Glick, as he is killed in front of his house, prompting Israeli security  to be tightened around him, according to Al Ray.

The American-born rabbi was shot in the upper chest, at close range, in 2014, when an assassination attempt took place in Jerusalem, over Glick’s extremist policies and racial incitement towards Palestinians.

After he recovered from his wounds, Glick was charged with assaulting and injuring a Palestinian woman in the Al-Aqsa courtyards, and was denied access to the holy site. Nearly 18 months later, an Israeli court acquitted him, and he visited the mosque a week later.

Glick led various provocative tours in the courtyards of the Al-Aqsa Mosque, in occupied Jerusalem, as he believes it should be destroyed “in order to rebuild the temple,” and became a prominent figure of the so-called “Temple Movement,”

The “Temple Movement” believes that the Israeli system of government must be replaced with a monarchy based on the Jewish Law (Halacha) throughout ‘Eretz Yisrael’ (all of historic Palestine, and beyond.)

Glick lives in the illegal Jewish-only colony of Otniel, south of the southern West Bank city of Hebron, and is the head of the so-called “Temple Mount Heritage Foundation.” He was also the head of the “Temple Institute,” which calls for destroyed Al-Aqsa and replacing it with the “Third Temple.”