Ehud Barak: If Government Won’t Get Back on Track, We Must Topple It 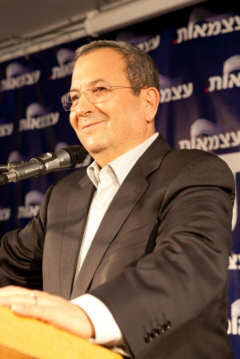 Barak hinted, during a speech to the Herzliya Conference, Thursday night, that he may return to politics to knock over Israel’s government:

“I call on the government to pull itself together and get back on track,” said Barak. “If it does not do so – it will be upon all of us, yes, a-l-l-l-l of us – to get up from our seats, both cozy and less cozy, and topple it, through mass protest and through the ballot box, before it will be too late.”

In a long, detailed speech, he sharply attacked Prime Minister Benjamin Netanyahu and called him and his current government “weak, feeble, boisterous and radical.” Barak said that Netanyahu and his government failed in guaranteeing security to Israeli residents and undermining the fabric of Israeli democracy.

Barak was leader of the Labor Party until January of 2011. He previously held the posts of Minister of Defense and Deputy Prime Minister under Benjamin Netanyahu, from 2009 to 2013.

Leveling heavy criticism at Netanyahu’s government, Barak asserted, according to the Middle East Monitor, that Israel’s isolation was very much a possibility:

“But, to say it can’t happen? It could happen, even if we don’t want it to. We don’t want a boycott, but there is liable to be a boycott. We don’t want Israel’s isolation. But, Israel could find itself in a very painful situation.”

According to the Times of Israel, he accused Netanyahu, Thursday night,  of lying about his desire for Palestinian statehood, cheapening the Holocaust by ‘Hitlerizing’ every threat.  He blasted Israel’s current government , saying it was putting the country on the path to becoming an “apartheid state,” and should be brought down if it fails to get back on track.

Commenting on the movement to boycott Israel, Barak referenced South African apartheid, and noted that “the pressure and the sanctions” were what “brought about [the leadership’s] awakening.”

He was defeated by Likud leader Ariel Sharon, in 2001, subsequently resigning as Labor leader, and from the Knesset. He left Israel to work as a senior advisor with United States-based Electronic Data Systems, and partnered with a private equity company focused on “security-related” work.

He is jointly the most highly decorated soldier in Israel’s history, according to Wikipedia, and holds a master’s degree, in engineering-economic systems, from Stanford University.