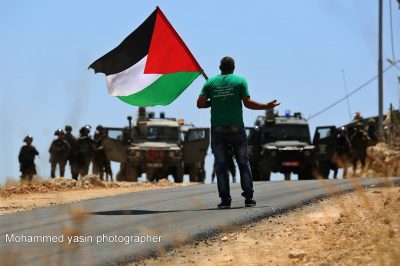 Many Palestinians, accompanied by Israeli and international peace activists held, on Friday afternoon, the weekly nonviolent protest against the Annexation Wall and colonies, in the village of Bil’in, near the central West Bank city of Ramallah, before the soldiers tried to stop them.

Peace activist Ashraf Abu Rahma told the IMEMC that  this week’s protest was conducted by approximately 30 persons, including around 10 Israeli activists and five internationals, and that, although the soldiers did not fire on the protesters, they tried to push them around and force them to leave the villagers’ lands.

The army surrounded the entire area, while many soldiers hid behind an old house in an attempt to ambush and kidnap the protesters.

“We marched peacefully, and then one of the soldiers started shouting at me, and told me that this area was a closed military zone – I told them this is my village, our lands” Abu Rahma added, “Another soldier threatened to arrest me, and I told him the same things. I also said that am unarmed, while you are heavily armed, and using force against us.”

“Every time when there is a protest, they start attacking us and firing at us. We believe in nonviolent resistance, but this occupation, is killing us, wounding us and imprisoning us… it just wants us to accept it”, Ashraf told the IMEMC.

“They even want to imprison us in our own homes,” he said, “We love peace, seek liberty; we want to be able to enter our orchards and lands. We want to live as an independent nation.”

In 2012, the soldiers detained Ashraf Abu Rahma, cuffed and blindfolded him, before a soldier shot him in the leg from a close range. He was also repeatedly kidnapped and imprisoned.

The shooting of Abu Rahma was captured on tape, and the soldiers later kidnapped the father of the young girl who filmed the assault.