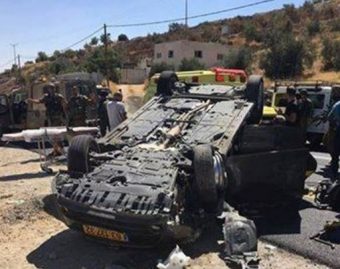 “I saw a car that crashed and flipped over; I instantly stopped my car and rushed towards it to provide aid to the wounded. I didn’t care that my life, and the lives of my family members who were with me, could be at risk. I am a doctor and my first priority is providing needed aid,” Dr. Ali Shroukh from the ath-Thaheriyya town, near Hebron said.

The doctor was talking about the shooting attack that took place near the Samoa’ town, south of the southern West Bank city of Hebron, that led to the death of one Israeli colonist settler, while his wife and two children were injured.

The doctor said he had no idea about what had happened, and that all he knew was that there were people who needed help when he saw the crashed Israeli car.

The Israeli family members were still in the vehicle, and he rushed towards them to provide whatever help he could, after introducing himself to them as a doctor. An Israeli police car was also there, and he had to let the officers know he was a doctor. Shroukh first saw an Israeli woman, wounded and screaming, and instantly helped her out of the crashed car. He then helped her family, but her husband, later identified as Michael Mark, 48, was already dead.

His wife, Chava, was critically wounded, and two of their children, Pedaya, 15, and Tehilla, 14, suffered moderate and light wounds. The family was from Otniel colony, built on Palestinian lands, south of Hebron.

The Palestinian doctor told the Maan News Agency that a Red Crescent Ambulance was the first to arrive at the scene, and provided first aid to one of the wounded teens, after placing her on a stretcher.

“I asked the soldiers for some bandages and help because I wanted to stop the bleeding of the young girl,” he added, “But the soldiers didn’t want to cooperate with me, because they wanted to wait for the Israeli ambulance.”

“And then an Israeli ambulance arrived – I saw a doctor helping in the rescue; she was the first to help, along with her team,” Dr. Shroukh said.

Dr. Shroukh also stated that all what he wanted to do was to perform his humanitarian duty, to provide medical attention to those who need it.

“It wasn’t me who called for an ambulance, whether Red Crescent or the Israeli Magen David Adom, I just rushed to help – it does not matter what nationality, color or anything else,” he added, “Nobody even thanked me for my help, but I performed my duty, and that is all that matters.”