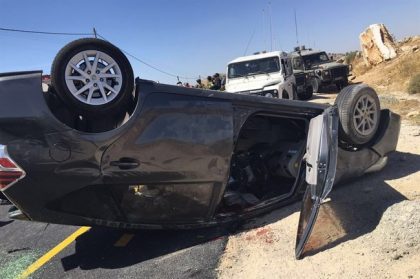 An Israeli rabbi was killed, his wife critically injured, and two children also injured when their car overturned near Hebron after apparently having been shot at by unknown assailants.

The deceased has been identified as Rabbi Michael Mark, a settler from the Hebron area in the southern West Bank. He was the father of ten children, two of whom were with him in the car when it flipped over.

Although the Israeli military has reported that this was a ‘drive-by shooting’, there were no witnesses cited to confirm this claim – and Israeli sources report only bullet casings found in the vehicle (which would indicate that a gun was fired from inside the vehicle, rather than from outside the vehicle into it).

The Israeli media report that the military was alerted to the incident after Israelis driving on the road saw the vehicle overturned on the side of the road.

Israeli daily Haaretz said the army is looking for a Palestinian, suspected to be behind the shooting, and that the military believes the shooter to be from Bani Neim town.

Israeli forces have closed the entire area and declared a ‘closed military zone’. According to the Israeli military, they have sent military forensics teams to collect evidence along the road.

This incident follows several days of violence, mainly focused around the Hebron area. Two Palestinians were killed on Friday, one of them a pregnant woman from Hebron and the other an older man who died of tear gas inhalation near Qalandia military base.

A 13-year old Israeli child was killed Thursday at a settlement near Hebron by a Palestinian assailant.

Route 60, where the car turned over, is the largest settler road in the southern part of the West Bank. Hundreds of thousands of Israeli settlers live in the West Bank in direct contravention of international law and signed conventions.