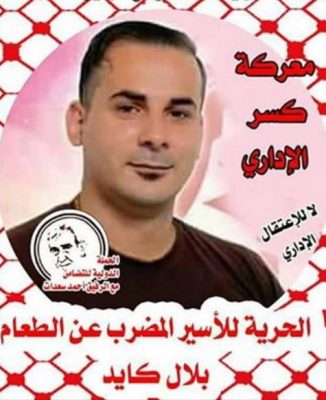 Palestinian detainee Bilal Kayed is ongoing with the hunger strike demanding an end to his illegal Administrative Detention that was imposed on him after he already served his 14.5-year sentence. The detainee refused an Israeli “offer” for his release in exchange for deporting him, instead of sending him back home.

The Palestinian Detainees’ Committee has reported that the Israeli security services offered to release Kayed, who started his strike on June 14, 2016, if he agrees to be exiled instead of being allowed back home.

It added that the detainee, currently held in solitary confinement in Ohalei Kedar prison, insists on his demand to be unconditionally freed, especially since he already served his imprisonment term, and is being held under arbitrary Administrative Detention orders, without charges or trial.

Israeli security officers and the prison security services met with Kayed, who told them that he will not accept to be deported, even if it means striking to death, and added that he is willing to be sent to court.

The detainee told a lawyer of the Committee that the decision to keep him imprisoned without charges, and the allegations of secret information, are just fabrications and illegal maneuvers that violate International Law and basic principles of human rights.

“If they have anything against me as they claim, then they need to send me to court,” Kayed said, “But it is all lies and manipulations; their alleged secret information does not exist. Every detainee has the right to a fair trial.”

Kayed is a member of the Popular Front for the Liberation of Palestine (DFLP). Many detainees, also PFLP members, said they would declare a hunger strike, that will likely expand.

The detainees conducted various solidarity moves, including hunger strikes, but suspended them until July 7th, awaiting the outcome of talks between Kayed and the prison administration, and said they will escalate their protests and strikes, should Israel keep him held under these arbitrary orders.

One June 24th, the PFLP announced that Israeli authorities transferred dozens of PFLP prisoners, who declared a hunger strike in solidarity with Keyed from Megiddo prison to other Israeli prisons.