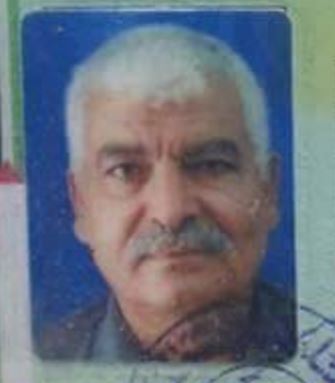 Updated: The slain Palestinian man has been identified as Taiseer Mohammad Habash, 62, from Aseera ash-Shamaleyya, near the northern West Bank city of Nablus.

Jul 1, 2016 @ 14:01 The Palestinian Health Ministry has reported, Thursday, that a Palestinian man, in his fifties, died due to severe effects of tear gas inhalation, after Israeli soldiers assaulted dozens of Palestinians trying to cross Qalandia terminal, north of Jerusalem, on their way to the Al-Aqsa Mosque. The man suffocated after the soldiers fired dozens of gas bombs on Palestinians who gathered near the terminal while trying to cross into Jerusalem, to perform prayers in Al-Aqsa Mosque, on the last Friday of the holy Muslim month of Ramadan.

The man was lying on the ground just a few meters away from the soldiers who did not offer any help, and prevented the locals, including medics, from reaching him.

The Palestinian Health Ministry said it is awaiting official verification of the slain man’s identity.

Palestinian Red Crescent medics later managed to reach the wounded man despite the large number of gas bombs fired by the soldiers, and various military restrictions, and tried to save his life before rushing him to a hospital, but he died due to severe effects of tear gas inhalation. The soldiers also assaulted dozens of Palestinians with clubs and batons, and prevented all men below the age of 45, from crossing the terminal.

At least forty Palestinians were injured after the soldiers fired gas bombs and rubber-coated steel bullets, and several others suffered cuts and bruises when the soldiers assaulted them.

The soldiers completely closed the terminal and fired rubber-coated bullets at Palestinians who tried to approach it.

On Friday morning, the soldiers shot and killed a Palestinian woman, identified as Sara Daoud Ata Tarayra, 27, near the Ibrahim Mosque, in Hebron city, in the southern part of the West Bank.

In addition, the army kidnapped two Palestinians in the town of Jaba’, south Jenin, and near Tulkarem one Palestinian near Tulkarem, in the northern part of the West Bank.

Also on Friday, the soldiers injured at least ten Palestinians near the Qalandia terminal, north of occupied Jerusalem, and kidnapped eight others in Hebron, in the southern part of the West Bank.

Furthermore, the soldiers kidnapped a young man, identified as Mohammad Samir Abu Zeina, 20, after stopping him on a sudden roadblock near the al-Ram town and the Qalandia refugee camp, while he was on his way to the Al-Aqsa Mosque. Abu Zeina is from Jenin refugee camp, in the northern part of the West Bank.