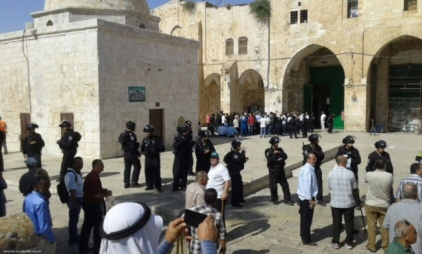 About 30 Israeli settlers stormed the mosque from Al-Maghariba gate, while the Israeli forces heavily deployed to guard them.

Israeli channel 10 said, according to Al Ray Palestinian Media Agency, that Yehuda Glick, the rabbi who led the incitement, had received threats on Facebook prior to the raid.

Al-Aqsa Mosque witnesses, almost daily, occurrences of incursions and violations by Israeli settlers and extremists, amid tight restrictions imposed on the entry of Palestinian worshipers.

In a related context, dozens of extremist settlers stormed, on Tuesday at dawn, Joseph’s Tomb in Nablus city, north of the West Bank, under heavy protection of Israeli forces, in order to perform Talmudic rituals there.

Local sources said that Israeli military vehicles stormed the eastern area of the city at midnight and surrounded the tomb. After that dozens of buses, lifting settlers came to the area. Settlers also storm the tomb on an almost weekly basis. However, the raids were reportedly quelled for the month of Ramadan.