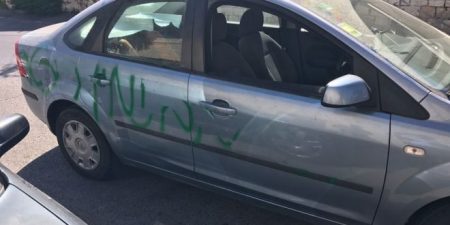 Israeli fanatics are believed to be behind the slashing of car tires and the spray painting of hate graffiti on cars in two different East Jerusalem areas, according to Israeli police.

According to WAFA, a spokesperson said that the tires of several cars parked in the French Hill and in Sheikh Jarrah areas were slashed and anti-Arab Hebrew graffiti such as “Death to Arabs” were spray painted on cars.

Israeli police claimed that an investigation has been opened into the incident after several Palestinians filed a complaint about the attack, the PNN further reported.

These “price tag” attacks are usually perpetrated by Israeli extremist settlers, and include the desecration of mosques, damage to Palestinian property, and the writing of racist graffiti on the homes of Palestinians.