Family Forced To Demolish Own Home Near Bethlehem 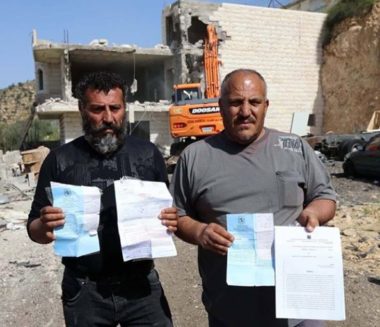 A Palestinian family from Beit Jala, near Bethlehem in the occupied West Bank, was forced to demolish its own home, after the Israeli army issued a demolition order, and gave the family 48 hours to demolish it, or face very high fines and fees if the military carries the demolition out.

The Israeli army is claiming that the property, a two-story building owned by Ayman Zreina and his family, in Bir Ouna area in Beit Jala, was constructed without a permit from the Israeli Civil Administration Office.

The family was forced to demolish its own home to avoid the very high fines and fees, in addition to the costs of demolition.

It is worth mentioning that Israel has recently demolished six homes, owned by the Zreina family in the same area, which is part of Beit Jala city.

One of the homes was a three-story building owned by a lawyer, identified as Basima Issa, and was demolished a week ago.

The area has been subject to constant Israeli violations, including home demolitions, in addition to orders targeting more homes, as Israel is trying to illegally annex it for the construction and expansion of its colonies, built in occupied Palestine in direct violation of International Law.