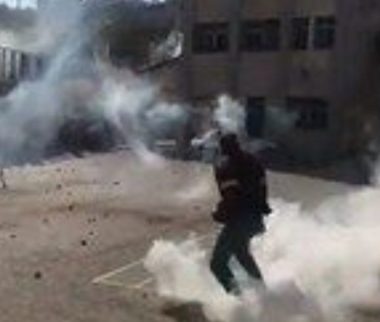 Israeli soldiers attacked, Tuesday, dozens of schoolchildren and residents with gas bombs in and around several schools in the southern area of Hebron city, in the southern part of the occupied West Bank.

Media sources said the soldiers fired a barrage of gas bombs and concussion grenades into several schools, and at many surrounding neighborhoods.

They added that the children were standing in line in their schools, in the morning, before starting their school day, when the soldiers fired the gas bombs and concussion grenades at them.

Medics rushed to the attacked schools, and provided the needed treatment to dozens of children, and teachers, after suffering the severe effects of teargas inhalation.

The schools had to shut down for the day, and the students were sent to their homes, due to the gas bombs and the fear of additional Israeli violations.

It is worth mentioning that the schools in that area are subject to frequent Israeli assaults, resulting in dozens of injuries and the disruption of the educational process.