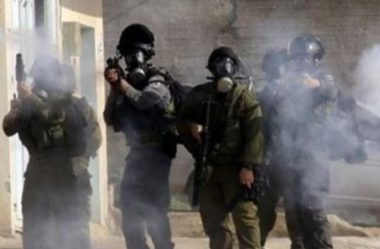 Israeli soldiers invaded, on Thursday morning, the southern area of Hebron city, in the southern part of the occupied West Bank, and fired gas bombs near a local school, causing dozens of schoolchildren to suffer the effects of teargas inhalation. The soldiers also invaded homes in the city, and in Yatta town, and confiscated two cars.

Media sources in Hebron that the soldiers invaded the area surrounding the local Tareq Bin Ziad School and fired many gas bombs and concussion grenades at students, protesting the invasion.

They added that several schoolchildren suffered the effects of teargas inhalation, and received the needed treatment by the local medics, who rushed to the school.

The soldiers also invaded many neighborhoods in southern Hebron and searched the homes of Ahmad al-Qawasmi and Anas al-Hashlamoun, before confiscating al-Hashlamoun’s car.

In addition, the soldiers invaded Yatta town, south of Hebron, and searched the home of Samir Bheiss, before confiscating his car.