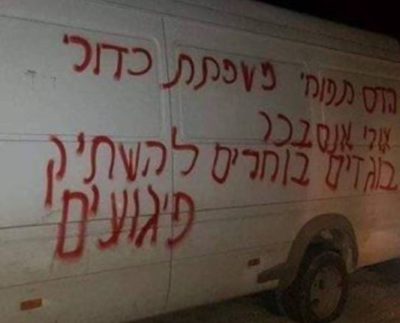 Abdul-Qader Abu Hakma, the head of Iskaka village council, said the colonists wrote anti-Arab, anti-Palestinian racist graffiti on several homes, and on the walls of the local mosque.

He added that the assailants also punctured the tires of twenty Palestinian cars, and wrote racist graffiti on them.

On Tuesday, a group of illegal colonists invaded a Palestinian home, in the Old City of Hebron, in the southern part of the occupied West Bank, and threatened to kill the entire family.