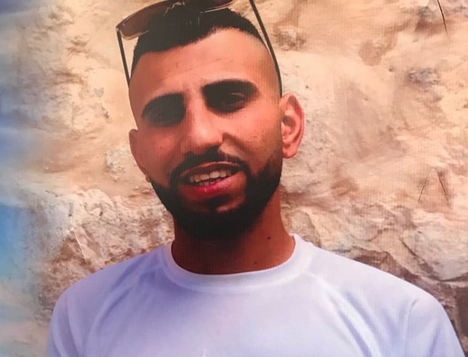 Although a month and a half has passed since the killing of the Jerusalemite, Faris Bassam Abu Nab, questions remain about the circumstances of his death, and his family members say Israeli officials have had contradictory and deceptive statements. Abu Nab was shot by Israeli forces near the Tunnel checkpoint, south of Jerusalem.

According to the Jerusalem-based Silwan Information Center, Bassam Abu Nab, the father of the killed Palestinian, said that he assigned a lawyer to follow up on the case of shooting his son and investigate, stressing that he continues to search for the truth of what happened to his son, and to hold the perpetrators accountable and punish them.

Abu Nab said: “AbuKbeir Institute of Forensic Medicine refuses, to this day, to give me the results of the autopsy, and I did not receive the initial or final report, and he told me that it was transferred to the Police Investigation Unit (Mahash), and when I headed to the police and asked the official, he first denied and then refused to provide any information”.

Abu Nab added that the condition of his son’s body revealed that he was killed “in cold blood”, because the bullets were in the upper part of the body, in the heart, chest, head, and neck, and the signs of assault were clear on his head from the back and lower back, as if he was dragged to the ground, in addition to dislocating his elbow, and all this refuted the occupation’s narration that only his feet were shot — but his feet did not contain any bullets.”

Abu Nab continued, “From the moment I learned about the incident, the occupation police told me that they opened fire at the vehicle from the rear on the pretext that it was ‘illegal’. But I myself found the car by chance parked in the parking lot of Al-Maskobyeh in West Jerusalem, and it had no sign of any bullets, and after examination and investigation it was found that it was legal.”

Abu Nab wondered: “Where are the surveillance cameras at the military checkpoint, and why did the Israeli media present a report on the incident with edited scenes?” He called for the full disclosure of the cameras’ recordings on the day of the incident.

He said: “The occupation forces have no right to kill anyone, whatever the reason, and they can use non-lethal electric weapons to arrest him.”

Abu Nab pointed to his pursuit and his family by the occupation authorities rafter his son was killed, including the invasion of his home, the assaults of himself and his children, and the interrogation of his three children last week. The interrogator told them: “Why do you say we killed your brother, the accident occurred in the West Bank. We didn’t have anything to do with it.” They also told the children to “not talk too much about this incident…it was a mistake and it happened.”

The mother of the victim confirmed that her son was committed to his work and said: “Faris was killed in cold blood, and he used his car to do delivery services and was working in cleaning restaurants and usually worked until after midnight. On the day of his martyrdom, he wore his clothes as usual and went out to work.”

The family confirmed that they would follow-up the case of their son’s martyrdom until the truth is revealed, and that they would remain steadfast in Jerusalem despite the abuse and prosecutions they are subjected to.

The Israeli occupation soldiers opened fire on Faris Abu Nab who is a resident of Silwan, on November 17th 2019, at the Tunnel checkpoint, south of Jerusalem, and his body was released to his family after three days of detention.