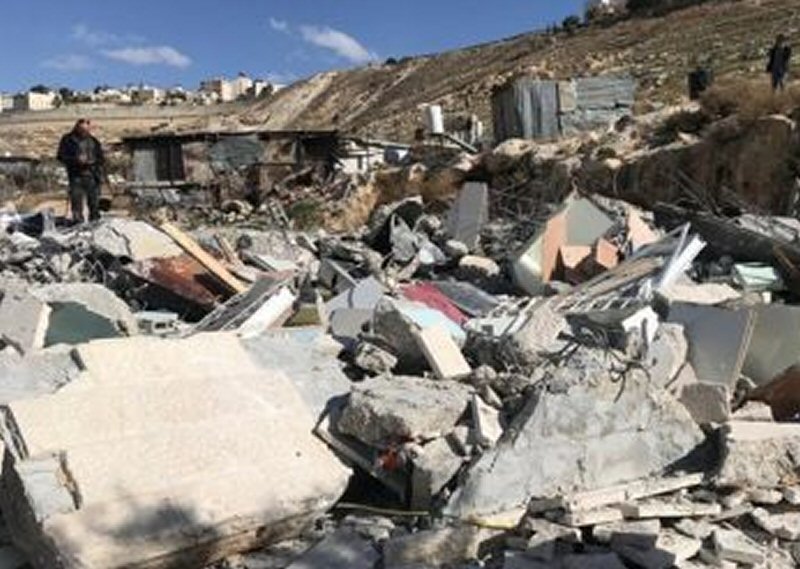 This week, PCHR documented 224 violations of the international human rights law and international humanitarian law (IHL) by Israeli occupation forces (IOF) and settlers in the occupied Palestinian territory. This week witnessed an increase of Israeli violation regarding demolition and settlement activities in addition to settlers’ attacks and incursions. They were as follows:

As part of the Israeli shooting and excessive use of force:

In terms of excessive use of force, IOF wounded 45 Palestinian civilians, including 18 children and 3 women, on the 85th Friday of the Great March of Return and Breaking the Siege protest (GMR) in eastern Gaza Strip. IOF shot and injured 11 civilians with live bullets and shrapnel; 4 of them deemed in serious health conditions, in addition to targeting protestors’ upper body. As a result, many civilians injured despite the peaceful nature of the protests in the 5 encampments. Moreover, 7 shootings were reported by IOF at agricultural lands in the Gaza Strip; while 3 shootings were reported by the Israeli gunboats against the Palestinian fishing boats, east and west of the Gaza Strip; no casualties were reported. Furthermore, a civilian shot and injured in the lower part of his body and arrested while attempting to sneak into Israel via the border fence.

Under the settlement expansion activities in the West Bank, including occupied Jerusalem, PCHR documented 12 IOF violations that included banning farmers from afforestation of their lands in Tulkarm and Kisan village, east of Bethlehem, claiming that these lands are confiscated by IOF; demolishing 2 residential tents; levelling works to expand  ” Shvut Rachel” settlement established in lands of Jaloud village in Nablus; demolishing livestock barns, confiscating water tanks and an agricultural tractor in Tubas; demolishing 2 houses in Jerusalem; confiscating a bulldozer and digger; and demolishing 2 houses in Hebron.

In terms of the Israeli closure policy, on 19 December 2019, Israeli authorities decided to decrease the fishing area from 10 to 6 nautical miles off the Gaza Strip shores, before increasing it to 15 nautical miles in southern Gaza Strip shores starting from Tuesday morning, 24 December 2019. This comes in a time where the Gaza Strip still suffers the worst closure in the History of the Israeli occupation of the oPt as it has entered the 14th consecutive year, without any improvement to the movement of persons and goods, humanitarian conditions and bearing catastrophic consequences on all aspects of life. Furthermore, IOF uses Erez Crossing that is designated for movement of individuals as an ambush to arrest Palestinians who obtain permits to exit via Israel.  Meanwhile, the West Bank is divided into separate cantons with key roads blocked by the Israeli occupation since the Second Intifada and with temporary and permanent checkpoints, where civilians movement is restricted and they are subject to arrest. In this week, IOF established 71 temporary checkpoints and arrested 4  Palestinians.

Violation of the right to life and to bodily integrity

On the 85th Friday, 20 December 2019, weekly protests were launched in eastern Gaza Strip, in solidarity with Hebron Governorate, which has been lately the target of Israeli settlement schemes. This Friday’s protest titled: “Hebron is a thorn in the way of efforts to create a Jewish majority”, resulted in the injury of 45 civilians, including 18 children, 3 women and a journalist.

It should be noted that this kind of boats is called “Felucca Boats”, which is uninhabited boat where lambs are installed on it to gather the fish around it to facilitate fishing. Fishermen usually leave these boats in the water. At approximately 16:00 on the same Sunday, fisherman Baker went to check the boat and found all the searchlights were damaged after Israeli naval forces opened fire at them.

Demolition and Confiscation of Civilian Property for Settlement Expansion Activities

The farmers had planted part of the lands with olive and forest seedlings as part of activities organized by the national factions in Tulkarm and local councils in the villages of al-Kafriyat and ‘Ezbet Shofah.  Those activities came after the Israeli government announced seizure of 788 dunums of these lands in favor of a new industrial settlement area.  According to this project, the agricultural area will turn into industrial and commercial areas where there are transportation, buildings, public institutions, car parking and roads for the new industrial settlement.

Hussein Ghazal, an activist, said that IOF moved into this 100-dunum land and the officer in charge informed the Palestinian farmers that they are only allowed to enter their lands if they refer to the Military Governance office in “Gosh ‘Etzion” settlement complex in order to obtain an entry permit.  Ghazal said that IOF impose obstacles before lands’ owners, preluding to seize the lands as the settlers in the nearby settlements  continuously chase and attack farmers; the latest was against farmer ‘Atallah Ibrahim ‘Abyat when settlers sic their dogs on him.

It should be mentioned that IOF always arrive at the scene, interrogate the Palestinian civilians and take their testimonies.  However, the incidents are always recorded anonymously.  The Price Tag groups include extreme settlers who carry out hostilities against the Palestinians in the West Bank and occupied Jerusalem.

Ahmed Ghazal, Deputy Head of the Kisan Village Council, said “settlers from “Evi Hanahel” settlement beat up the mentioned farmer and sic their dogs on him.  As a result, ‘Abayat sustained various wounds and taken to Beit Jala Hospital for medical treatment.”  Ghazal added that the settlers attacked ‘Abayat after he refused to obey their orders to leave his land for them, noting that such attacks recently recurred and shepherds have become afraid for their lives.

The land’s owner, Hisham al-Barmil, said that he was surprised with a call from his neighbors telling him about what happened.  He immediately headed to his 30-dunum land to see hundreds of the trees that were planted tens of years ago uprooted and seized by settlers.  It should be mentioned that it was not the first attack by settlers on the area as 2 months ago they attacked plantings in the area, causing losses to the farmers.

“At approximately 02:30 on Friday, 20 December 2019, one of the area residents called to tell me that the area and cars were on fire.  I immediately headed to the area, where 2 cars parked in front of Saher Salim’s house were on fire, but we could not do anything. The Civil Defense arrived to extinguish the fire, and the area was full of racist slogans on the walls and floor of Saher Salim’s house.  Next morning, we contacted the competent authority to tell them about what happened.”

Nash’at Nas’asan (38) said that at approximately 15:30 on the same day he saw 10 settlers approaching the barbed wire surrounding the trees in al-Seder area.  They destroyed it and then entered the land to cut the olive trees and damage the branches.  They then fled away to their settlement.