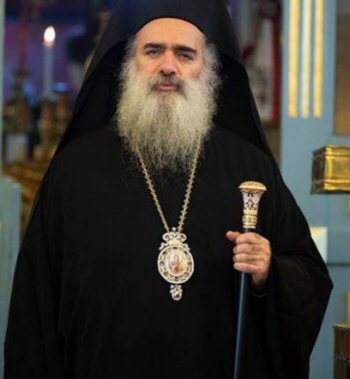 The head of Hamas’s political bureau, Ismail Haniyeh, has denounced what appears to be a possible attempt to assassinate Father Atallah Hanna, Archbishop of the Palestinian Orthodox Church in Occupied Jerusalem.

Father Hanna, on Monday, suggested that the Israeli occupation was responsible for the incident that happened to him last week:

“What happened could be an attempt to assassinate me or keep me sick for the rest of my life. The effects of the poisonous substance are dangerous, especially to the nervous system,” Hanna told the official Jordanian TV channel.

He said, according to Days of Palestine, that a Palestinian team had embarked on ascertaining the type and source of the substance he had inhaled.

Father Hanna was rushed to a hospital in Jordan, last week, after he inhaled a chemical substance that had been sprayed by the Israeli occupation authority near the patriarchate, in the holy city.

Haniyeh phoned Father Hanna and wished him a speedy recovery.