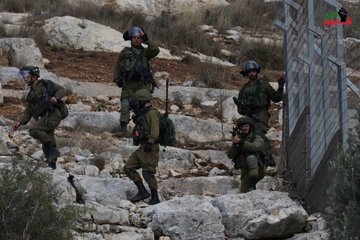 At the weekly Friday afternoon protest in the Palestinian village of Kufr Qaddoum, dozens of Palestinians and foreign solidarity activists suffered from tear gas inhalation when Israeli troops attacked the non-violent demonstrators.

The protesters were calling for the re-opening of the main road in the village, which was closed by Israeli military forces 16 years ago. The road closure has caused undue suffering for the residents, and has prevented their freedom of movement and essentially imprisoned them in their village.

According to local sources, the Israeli forces stormed the village firing rubber-coated metal bullets, tear gas canisters, concussion grenades and sound bombs, which resulted in dozens of gas inhalation cases who were treated in the field.

The coordinator of the Popular Resistance, media spokesman for the “Fatah” movement in the Qalqilya region, Murad Shtewi, told reporters with the Wafa News Agency that the participants in the march chanted slogans supporting the Palestinian leadership and its diplomatic achievements, the latest of which was the decision of the Prosecutor of the International Criminal Court to open an investigation of the Israeli crimes against our people.