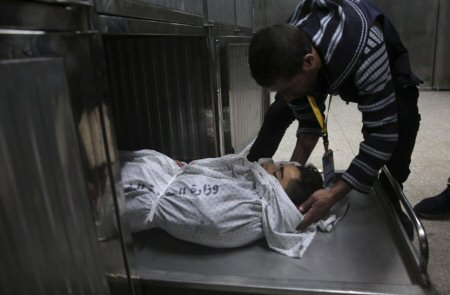 A Palestinian teenager was recently shot and killed at the Bet Il checkpoint, at the northern entrance of the occupied West Bank city of al-Bireh.

Qassem al-Abbassi, 17, was killed by Israeli forces on Thursday night, while he was in a private vehicle with his friends who were attempting to pass the checkpoint.

Abbassi is from the town of Silwan, in occupied East Jerusalem. His body has been withheld by the Israeli army.

On Friday, Abbassi’s family contested claims by the Israeli military that he had attempted to ram his car into the soldiers.

In a press statement, family elder Moussa al-Abbasi said that what happened to Abbassi is murder, and demanded a full investigation into the shooting.

The family also called for an autopsy to be carried out and for Abbassi’s body to be returned to them, in order to conduct a proper burial and funeral.

Maan News Agency reported that Mohammed al-Abbassi, a relative of the slain teen, was with him in the car at the time of the shooting.

“We were on our way to Nablus when we reached the checkpoint,” Mohammed said.

He said that an Israeli policeman approached to tell them the road was closed.

“As we attempted to go back to the main road, we were chased by either Israeli soldiers or settlers,” he continued. “We could barely see as there were not enough lights, and it was very dark.”

It was at that point, Mohammad said, they came under a heavy barrage of gunfire from all directions.

A spokesman for the Israeli army told AFP news agency that “soldiers opened fire in the direction of a vehicle which was attempting to break through a military barrier in the Ramallah region, killing one of the occupants”. An investigation has been opened, the spokesman added.

In a separate incident, armed men opened fire at Israeli soldiers stationed by the illegal Jewish settlement of Ofra, east of Ramallah, late Thursday. The men managed to flee the scene.

Israeli media reported that shots were fired at the Israeli army, and that soldiers responded with return fire.