Father And His Four Children, Injured In Jerusalem 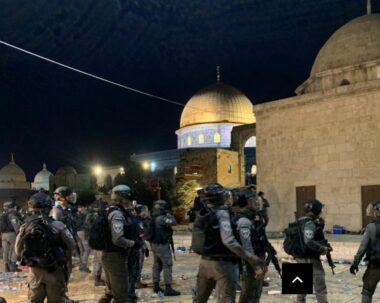 The Palestinian Red Crescent Society (PRCS) has reported that a father and his four children were injured, on Sunday at dawn, after Israeli soldiers fired concussion grenades at them near Bab al-‘Amoud in occupied Jerusalem.

In a statement, the PRCS said the father and his daughter suffered cuts and bruises, while his two other children suffered severe anxiety attacks when the soldiers fired the concussion grenades at them not far from the Al-Aqsa Mosque.

The PRCS added that its medics also provided treatment to 53 Palestinians during protests that erupted after the soldiers assaulted worshipers in Bab al-Amoud, Bab as-Sahera, Bab al-Asbat, Bab Hotta, and Sheikh Jarrah

Most of the injured Palestinians were shot with rubber-coated steel bullets, including eleven who were moved to hospitals for further treatment.

Israeli soldiers also stopped Palestinian ambulances and prevented the medics from reaching the area of Bab al-Amoud despite the large number of injuries.

It is worth mentioning that the soldiers also injured many Palestinians in the courtyards of the Al-Aqsa Mosque after the army fired a barrage of concussion grenades and gas bombs at them.