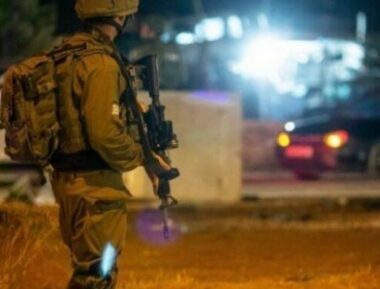 Israeli soldiers injured, on Sunday at night, dozens of Palestinians in the al-‘Arroub refugee camp and the at-Tiwana village in Masafer Yatta area, in the southern West Bank district of Hebron.

Media sources said the soldiers invaded the al-Arroub refugee camp, north of Hebron, and the at-Tiwana village, east of Yatta town south of Hebron, and fired several gas bombs and concussion grenades at Palestinians who protested the invasion, in addition to many surrounding homes.

One of the injured Palestinians is a young woman, Lialy Saber al-Hreini, who suffered injuries to her arm when the soldiers fired concussion grenades at her and a few other young women who were walking with her.

The Israeli attacks led to dozens of injuries, most of them due to the severe effects of tear gas inhalation, in addition to others who sustained cuts and bruises, before receiving treatment by medics of the Palestinian Red Crescent Society.

In related news, Israeli colonists from the illegal Beit Hadassah and Ramat Yishai colonies, which were built on lands stolen from the Palestinians in the center of Hebron city, attempted to attack many residents and their homes, however, the Palestinians intercepted them and managed to repel their assault, forcing them to leave.