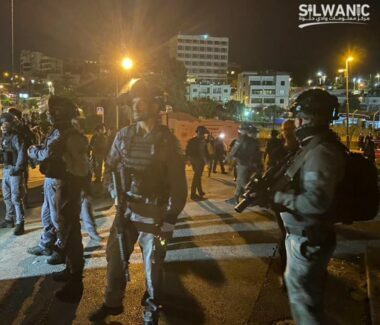 Israeli soldiers abducted, Sunday, at least twenty-five Palestinians; 24 of them are former political prisoners, during ongoing invasions and violent searches of homes and buildings, in the occupied Palestinian capital, Jerusalem, in the West Bank.

Media sources in Jerusalem said the soldiers stormed and searched dozens of Palestinian homes, and interrogated the residents while inspecting their ID cards, in addition to closing and isolating entire streets and neighborhoods.

The soldiers also abducted Nasser al-Qaaq from the al-Magharba neighborhood in Silwan, in Jerusalem, after assaulting and injuring him.

The Palestinian Prisons Society (PPS|) said the abductions are part of an ongoing Israeli policy targeting the Palestinians, especially in Jerusalem, and added that the army abducted more than 700 Palestinians, including children, women, and elderly, in the city in the first four months of this year.

It added that the army intensified its violations and invasions into Palestinian homes and communities in Jerusalem since the beginning of the current Muslim holy month of Ramadan, and abducted dozens of Palestinians, especially in and near the Al-Aqsa Mosque, in addition to the dozens of injuries resulting from attacks by the soldiers and groups of illegal colonialist settlers.

It is worth mentioning that the soldiers injured overnight until morning hours, Sunday, at least 205 Palestinians, including some who were injured in the eyes, during protests that erupted after dozens of soldiers and police officers invaded the Al-Aqsa Mosque; The soldiers also abducted and detained many Palestinians.